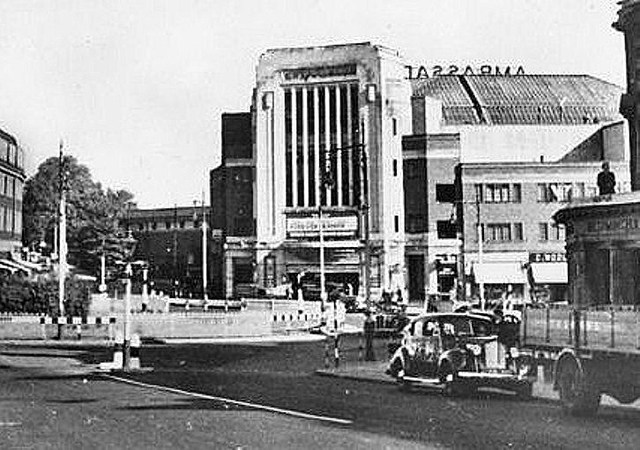 This large suburban cinema is located opposite Hendon Central underground railway (tube) station in the northwest London district of Hendon. It opened as the Ambassador Cinema on 15th February 1932. It was designed by architect G.E. McLeavy, working out of the office of the architectural firm of Henry F. Webb & Ash. It was built for London & Southern Super Cinemas Ltd. chain and was equipped for live variety shows and its facilities included a café and a Compton 3Manual/8Ranks theatre organ. It was taken over by Gaumont British Cinemas in December 1933 and re-named Gaumont in 1949.

It was split into three screens on 13th May 1973 with seating now 580, 399, and 423. Classic Cinemas were taken over by the Cannon Cinemas group and it was re-named Cannon in December 1985. Another name change came when Cannon Cinemas sold out to MGM Theatres and it became the MGM Cinema from 1993, but this was short lived and a further final name change to ABC Hendon occurred in 1996. The ABC was closed on 20th January 1997 with the films “Daylight”, “Star Trek:First Contact”, “Jingle All The Way”, and “101 Dalmations”.

The former Ambassador Cinema was converted into a Holmes Place gym and fitness centre, which became a Virgin Active Health Club. By 2018 it was the Nuffield Health Centre.

I was assistant manager here briefly between 1973-4 to the colourful Douglas Baker. Despite taking new releases a week after the Odeon, we regularly did better business. Once a junior projectionist opened the matinee very much the worse for wear following a lunchtime session causing me to shut down the show temporarily. No-one actually complained other than to point out the house lights were going up and down and the screen tabs opening and closing, all with the picture on the screen. In the box, the film was spilling all over the floor so the Chief had to be called in on his time off to put it right – and he was not best pleased.

The stage house, associated dressing room accommodation and back stage facilities have been demolished and replaced by apartments.

When Classic took over this cinema,they made it their flagship.there were many stage shows.i remember syd Lawrence and his orchestra and the comedian Libby Morris.I again was present at the last performance.

Many happy memories of this cinema – we moved nearby in 1995 and this became our local until closure. There was a little newsagent by it where everyone would buy food and drinks for much cheaper than in the auditorium!

Even at this time there was a ‘Saturday Kids Club’ where a magician or other entertainer would perform on the stage before the feature – something I’ve never seen since and must have seemed like from a bygone age even then! But to my seven year old eyes it was great, and I was disappointed when it closed.

This used to be my local cinema when my parents lived in Hendon. I was amazed at the sound of the ‘traps’ (Timpani) coming from an organ, as I was used to the ‘straight’ organ in the local church. The main house tabs were a deep plum red with a gold design of rectangles appliqued on. Latterly the screen curtains were not used and I could never decide whether this was ‘modernity’ or if the tab motor had burnt-out. I was aware of the partial fly tower over the stage and was saddened that only one play ‘The Amorous Prawn’ ever played there live. I went to see “Oklahoma!” on screen there. It was always a dark auditorium and when the house lights came up, I was the only person sitting in the circle…