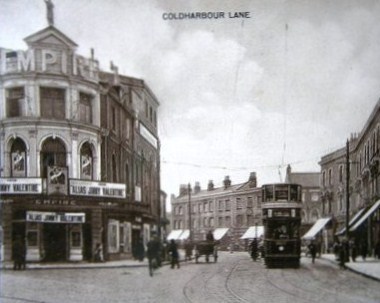 Located in the south London district of Camberwell. Opened by John Brennan Mulholland as the Metropole Theatre on 28th October 1894 with “Sowing the Wind”. It was a legitimate playhouse theatre that had a capacity of 2,050 (which included standing room). There were 100 seats in the orchestra stalls, 800 in the pit at the rear, 350 in the dress circle and 800 in the gallery. The interior was in an Indian style, with the auditorium ceiling having a painted dome with painted panels on the proscenium, all the work of interior decorators De Jong & Co. The theatre was initially lit by gas. It was located at the apex of a triangle of land on Denmark Hill and Coldharbour Lane, with the entrance at the apex, facing the centre of Camberwell.

In 1903 the capacity is given as 1,596 (again including standing room) with seating for 1,004. In 1906 it was re-named Camberwell Empire Theatre. Films were being shown from 1914 and from 1918 it became a mixed use live theatre and cinema known as the Camberwell Theatre and Picture House, operated by Associated Cinematograph Theatres. From 1924 it was a full time cinema known as the Camberwell Empire and Picture Palace.

Equipped for sound in 1930, it had a British Acoustic sound system and was re-named the New Empire Cinema, screening films with occasional variety acts on the 28 feet deep stage. There were three dressing rooms listed.

It was purchased in May 1937 by the Odeon Theatres chain of cinemas operated by Oscar Deutsch. It closed in August 1937 and was quickly demolished for a new Odeon Theatre to be built. The new Odeon cinema was built on an expanded site and was designed by Andrew Mather, assisted by Keith P. Roberts and opened in March 1939 with 2,470 seats.

A vintage photograph of Camberwell Empire Theatre in around 1906:
View link