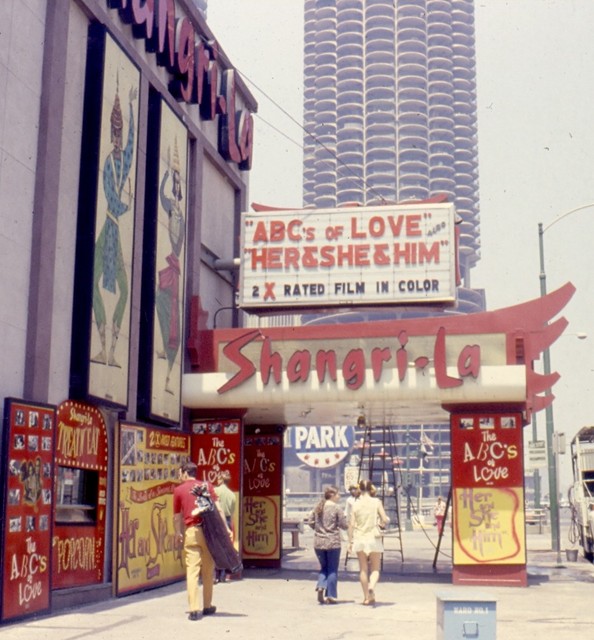 The Rhumba Casino, which opened in 1941, was built on the site of the Three Deuces nightclub (which was in business since the mid-1920’s until it was destroyed in a fire in 1940. It gets its name from its address at 222 N. State Street). In 1944, the space became the Polynesian/Far Eastern-themed Shangri-La restaurant.

After the restaurant was closed in 1968, it was remodeled into the Shangri-La Theater in 1969-70. It was operated by Kohlberg Theaters, which was also the last chain to run the nearby Oriental Theatre as well as a number of other theaters and drive-ins around the Midwest. Opened June 26, 1970 with “The Strawberry Statement”, the Shangri-La Theatre began to show pornographic films within a year.

Operating into at least 1979, the building which housed the Shangri-La Theatre was demolished in 1981. Its site was used for a while as a parking lot. Eventually the remainder of the buildings on the entire block, an office building and retail stores, a fire station and a parking garage, were demolished and replaced by a hotel, now the Renaissance Chicago.

1973 Tribune photo by Quentin C. Dodt in the link below.

This opened on June 26th, 1970. Grand opening ad in the photo section. Adult programming by the end of 1970 until it closed.

“Happy Birthday Kup” in a brief glimpse of the Shangri-La marquee at the head end of this 1965 film on YouTube.

It appears the Shangri-La was still open in mid `79. Just added a photo that shows the State Street Mall nearing completion, and the Shangri-La still seems possibly active.

Photos of Loop, Chicago & Shangri-La Theatres in below link.

Flickr link with proper credit for the previously posted 1964 photo. rivest266 incorrectly believed it was 1968, but Marina City pictured opened to tenants in 1963. The square hotel portion on the left opened in 1964. Other aspects of the buildings were completed by 1968. I live in Chicago and ice skated at Marina City in the `60s.

One not in the gallery, May 1974 photo credit MasMiguel.