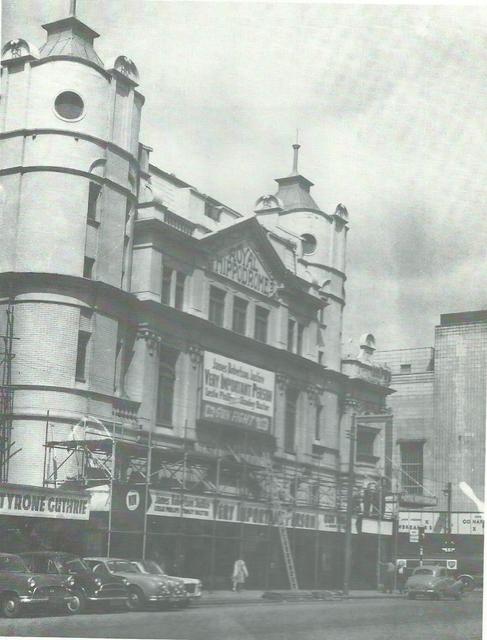 The Royal Hippodrome Theatre was located adjacent to the Grand Opera House and (from 1936) across the road from the large Ritz Cinema. It opened on 2nd November 1907 as a variety theatre. It had a 46 feet wide proscenium, a 36 feet deep stage and 14 dressing rooms.

From July 1931 it was taken over by Associated British Cinemas(ABC) and re-named Hippodrome Cinema, but they only operated it for several years, as in July 1938 their lease expired and an independent operator had took it over and it was re-named Royal Hippodrome Cinema.

It was taken over by the Rank Organisation from 28th November 1960 and they carried out a modernisation of the building, which included covering the ornate facade with plain sheeting, which made the building look like a warehouse! It re-opened on 16th October 1961 as the Odeon Cinema.

It was damaged by IRA bombs in 1974 and the Rank Organisation decided to pull out of Northern Ireland. The building was taken over by an independent operator on 21st April 1975 and was re-named New Vic Cinema. Films continued as well as some variety shows, but the end came in 1987 when it was converted into a bingo hall.

In August 1996 the building was sold for re-development and the bingo operation closed. The Grand Opera House next door expressed an interest in using the building as a second theatre and additional bars and office space, but this never happened. It was demolished in 1998 and an extension to the Opera House was built on half of the site which opened in 2006. The other half of the site at the corner of Grosvenor Road was taken over to build the (now 5*) Fitzwilliam Hotel.

See my comment on the Gaumont Belfast page for information about another possible Bertie Crewe-designed theater in Belfast.

ABC’s lease expired in July 1938 and a new operator, David Forrester Theatres Ltd (who had built up a chain of theatres and cinemas in England), took over. Forrester changed the bill to a mix of live performances and films. By 1940, though, the Hippodrome had come under local control again with G. L. Birch taking charge. Films became,again, the predominant entertainment but live performances were not overlooked. In April 1951 it was acquired by Warden Ltd, the owners of the Grand Opera House next door. In 1960 the Hippodrome was sold to Rank (as was the Opera House) and became an Odeon on 16 October 1961. It was announced on 11 November 1974 that Rank had sold all its Northern Ireland cinemas (14 including a number which had closed) to a group of local businessmen, who had formed a new company, Belfast Cinemas Ltd., to run them. The cinema changed its name to the New Vic on 21 April 1975.

Just to clarify my last comment re the takeover in April 1951. The man behind this acquisition was George Lodge, who by this time already controlled the Imperial cinema in Corn Market and Warden Ltd., the owners of the Royal cinema in Arthur Street and the Grand Opera House (next door to the Hippodrome). Lodge was, undoubtedly, the most significant figure on the Belfast cinema and theatre scene from the late forties until the early sixties.