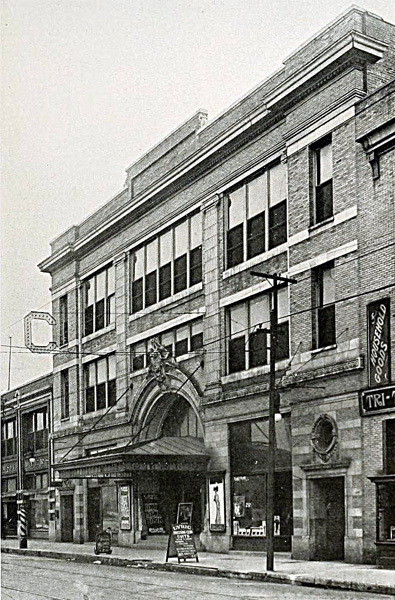 Opened as the Jefferson Theatre on November 16, 1908. It was programmed primarily with drama, opera and music. It was named after theatrical personage Joseph Jefferson. Renamed Lyric Theatre from 1911, it had a period of vaudeville in the teens and competed with the Lyceum Theatre and the Orpheum Theatre. Sarah Bernhardt appeared at the Lyric Theatre, and in the 1920’s it began screening movies.

After the big movie palaces opened in the 1920’s, the Lyric Theatre fell on hard times partly because of its location far from Main Street. It was much plainer and far less luxurious than the new, cooler movie palaces. It, however, was the site of the first opera broadcasts in Memphis from WMC Radio in January 1923. The most famous incident happened in 1929 when “King of Kings” (released in 1927) ran into trouble with local censors because of scenes not included in the Gospels. The censors won in a court battle and the movie was banned in Memphis.

The Mazda name (1930) is from the Mazda Grotto, a fraternal organization. Its aim was to organize a recreational center, which failed, and the Junior Order of Mechanics too over in 1932. Some boxing matches were held in the building. The city owned the building (in receivership) when it burned on January 23, 1941, probably a victim of a lightening bolt. The city hadn’t even insured the building and it had been virtually abandoned.

Located where today the Madison overpass crosses Danny Thomas, there is new construction and parking at this address in 2013.

Have found and retrieved my theatre memorablilia from Schwab’s, now starting a new project concerning same for Memphis Heritage. This explains my return to the discussion after, say, 25 years.

293-295 Madison shows a Jefferson Theatre in 1910 and a Lyric Theatre in 1912 in the Polk City Directories for those years. The 1908 directory shows a Germania Hall (the German community auditorium which did have stage presentations) at 190 Jefferson but only a coal company and Patterson Transfer at the 309-311 address. What year was your information?

Vincent, it’s been too long since I did this research and can’t tell you a date anymore. Seems odd that there would be a Jefferson Theatre on Madison Ave when Jefferson Ave is just a block away. It is certainly possible, but you have to hope that the owners weren’t that blind to the possibility for confusion. Since you have access to the city directories maybe this will help: the storefront at the far left, the big sign is cut off but says “…aus and Co. Dyers” and the small sign up under the canopy says “..raus and Co. Cleaners.” The word “Dyers” appears again right next to the entrance. Could be Straus or Kraus.

Immediately to the left of the theatre’s lobby appears to be a barber shop. (What is it about theatres and barber shops?) For all the world I think the name is “Ed’s.”

Can’t make out what’s immediately to the right of the lobby, one word on the window might be “buffet.” Did they have buffet’s in 1910?

What I wouldn’t give to be able to read the poster cases at the theatre entrance and the little A-frame sign on the sidewalk. (And did you notice the horse at the far right?)

Re the Germania Hall, I remember seeing that in a different context entirely. Correct me if I’m not wrong, but wasn’t that where Oscar Wilde spoke in 1882 (1883?). Probably a different venue from this entirely.

Trade publication The Billboard noted in its issue of December 5, 1908, that the Jefferson Theatre in Memphis had opened on the 16th of the previous month. A 1912 book called “Standard History of Memphis, Tennessee: From a Study of the Original Sources,” by John Preston Young and A. R. James, devoted several paragraphs to the Jefferson Theatre ( Google Books scan here.) As it is out of copyright, I’ll quote the entire passage:

“In 1908 a three-story, fire-proof building was erected at 291-3-5 Madison Avenue, by the Madison Avenue Theatre Building Company, for a theatre and leased to the Jefferson Theatre Company November, 1908. This theatre is an ornament to the city with its cream-colored brick and terra-cotta trimmings and an artistic marquee of iron and glass stretching across the sidewalk. The lobby is of variegated Tennessee marble and the interior finishings and seating are in mahogany and leather.

“This new theatre was opened with a dramatic stock company and presented standard and popular plays at popular prices, under the management of Mr. A. B. Morrison.

“Mr. Stainback follows the history of this new play-house, thus:

“‘In September, 1909, the Jefferson opened as a link in the chain of vaudeville theatres under the direction of William Morris. For six weeks high-class vaudeville at popular prices remained the policy of the house, but a few weeks later the theatre again became the home of a stock organization under the management of Mr. Morrison and as such finished the season 1909-1910. During the memorable summer of 1910, when plans for the theatrical war between Klaw and Erlanger (known as the Syndicate) and the Shubert’s was formulated, Klaw and Erlanger secured a long term lease on the Jefferson in which to play their attractions; so the opening in September found the pretty Jefferson presenting the Syndicate shows at high (or standard) prices. At the close of the season 1910-1911 quasi peace was declared between the warring factions of the theatrical world.’

“May 1, 1911, Mr. Stainback, then operating the Bijou Theatre, secured the lease of the Jefferson. The Bijou Company then made some improvements to the theatre and renamed it the Lyric. Under this management it opened in September, 1911, with Mr. Jake Wells, president, and Mr. B. M. Stainback, an experienced theatre man, manager.

“‘On June 29, 1912, the Lyric closed its first season, the longest and most successful in the history of the theatre. Standard dramas and musical comedies at popular prices, booked through the Stair and Havlin agency, was the policy of the Lyric for the season 1911-1912.’”Trade journal The Bridgemen’s Magazine reported in its May, 1908, issue that the Jefferson Theatre had been designed by Memphis architect John Gaisford.

Joe: what a great article! And I stand corrected. The Jefferson Theatre, stood on Madison, not on Jefferson, a block away. It soon became known as the Lyric and later the Mazda. Thanks for the addition. Now if we can just find some more photos…

There’s a photo on this page, where it’s listed under the name Lyric Theatre, but it’s very similar to the photo above.

As the Jefferson (opened September 1908) it was primarily drama, opera and music. It was named after theatrical personage Joseph Jefferson, not Thomas Jefferson. As the Lyric (from 1911) it had a period of vaudeville in the teens and competed with the Lyceum and the Orpheum. The Lyric did show movies in the 20s. Two titles referenced are “The Big Parade”(1925) and “The Covered Wagon” (1923). The most famous incident happened in 1929 when “King of Kings” (released 1927) ran into trouble with Lloyd T. Binford because of scenes not included in the Gospels. The censors won in a court battle and the movie was banned in Memphis. After the big palaces were all open in 1921 the Lyric fell on hard times partly because of its location far from Main St. It was much plainer and far less luxurious than the new, cooler, movie palaces. It however was the site of the first opera broadcasts in Memphis from WMC in January of 1923. The Mazda name is from the Mazda Grotto, a fraternal organization. Its aim was to organize a recreational center, which failed, and the Junior Order of Mechanics took over in 1932. The city owned the building when it burned January 23, 1941 probably the victim of a lightning bolt. The city hadn’t even insured the building and it had been virtually abandoned.

John Gaisford, architect of the Jefferson Theatre, also designed the Marion (later Paramount) Theatre in Clarksdale, Mississippi. I’ve also found references to a theater project in Little Rock that Gaisford designed for New York theater owner Albert Weis in 1909, but I’ve been unable to discover if the house was built or, if it was, what it was called.