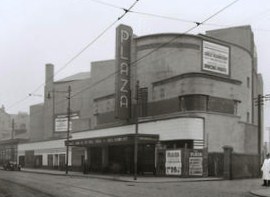 Built on the site of the Govan Cinema by Scottish Cinema and Variety Theatres, the Plaza Cinema opened on 21 December 1936 with “Rose Marie” starring Nelson Eddy and Jeanette McDonald. It was designed by Charles J. McNair and closed on 15 April 1972. There were 1,352 seats in the stalls and 942 in the balcony.

Slight Correction: “Anglo Scottish Cinema and Variety Theatres Ltd”., Was the original ABC Company around 1928-29 Anglo@s Parent compant British International Pictures Changed its name to “Associated British Picture Corporation” which then changed the cinema Co to “Associated British Cinemas” A New Share Issue was done at the same time. It was All founded by a John Maxwell a Scots solicitor by trade.. nothing to do with Daily Mirror Maxwell. I did have the original Prospectus, but it was put in a safe place.. by mother :o(

I worked at the Plaza Govan many moons ago – that image is actually the Lyceum further along Govan Road.

Hmm. I thought I was the only one to notice :o) I have somewhere in my collection an old picture of an ABC Cinema in Goven

There is also a picture on the webpage of the Lyceum (second Lyceum); there is a certain similarity in that both have curvature in their facades, occupy or occupied corner sites near each other on Govan Road, and were designed by the same architects, But the Plaza/ABC Govan opened in 1936 and is demolished, whereas the Lyceum opened in 1938 and the building, after serving as a bingo hall, was still standing and for sale in 2006.