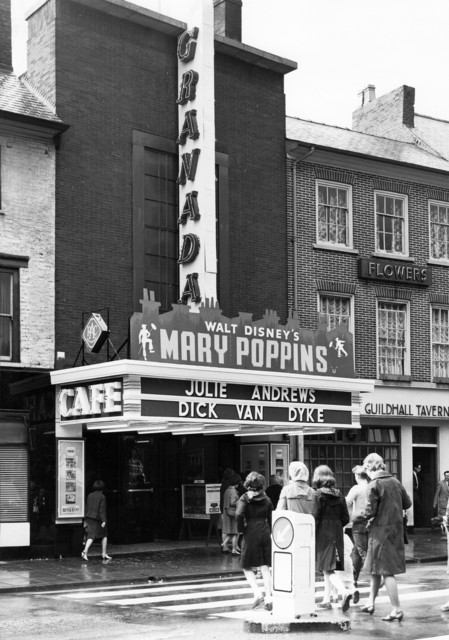 The State Cinema was built for the small independent circuit Wembley Cinemas Ltd. It opened on 4th October 1937 with Gary Cooper in “The Plainsman”.

The cinema had a rather narrow entrance and the auditorium was set back behind other buildings on St. Peter’s Hill. Inside the auditorium the decoration consisted of a dozen square panels on each side of the proscenium which had decorative mouldings and were illuminated. The main lighting in the ceiling was from three rows of square panels which were set flush to the ceiling.

The State cinema was equipped with a Compton 3Manual theatre organ which had an illuminated conole and was on a lift. It was opened by Reginald New. The proscenium was 40feet wide and the stage was 13feet deep and this was used occasionally for variety performances. There were two dressing rooms for artists. Cinema patrons had an added facility of a cafe/restaurant in which to meet and dine.

Gracie Fields made an appearance at the State Cinema on 31st August 1943 and one other highlight of the war years was a sell-out performance of the Glenn Miller Band on 24th September 1944, it was the first public performance by the band in the U.K.

The State Cinema was taken over by Medway Cinemas and then in February 1949 by the Granada Theatres chain. It was re-named Granada Theatre from 13th February 1950 when the film playing was Terry Moore in “Mighty Joe Young” and a stage show plus John Madin at the Compton organ.

From May 1966 it went over to part time bingo and films and on 8th April 1972 it screened its last film, “Tales of Beatrix Potter”, and became a full time Granada Bingo Club. This closed in October 1987 and the building was sold for re-development. It was demolished in March 1988 and a bank was built on the former entrance and foyer area.