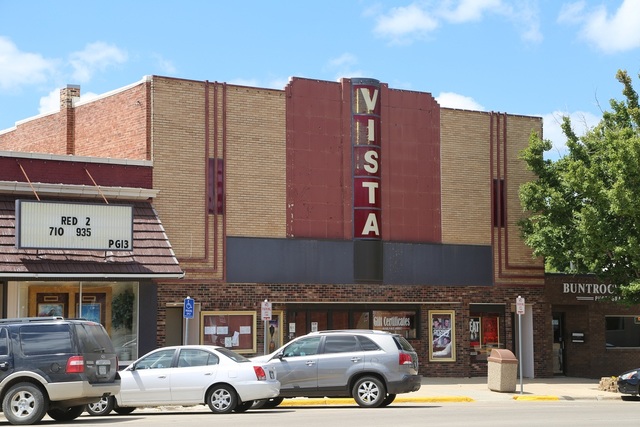 The Vista Theatre was opened in 1940.

I think World Theater may be an aka. The building material on the front of this photo looks similar to that in the 1982 photo.
http://tinyurl.com/crqv9m

The finding aid for the Liebenberg & Kaplan papers at the University of Minnesota Library lists two theater projects the firm worked on in Storm Lake. The first is listed as “Campus (Tracy Theatre) 1947-48” and the second as “Vista 1948”. The Vista must have been this house, but I’ve been unable to find any other references to theaters called either the Campus or the Tracy.

Storm Lake had a theater called the Empire operating from at least as early as 1916 and at least into the early 1930s, and I’ve found reference to houses called the Empress and the Princess operating in 1918. Storm Lake’s Opera House, which had been opened by 1889, was operating as a movie house when it burned down in 1916.

At least two movie theater projects were proposed for Storm Lake in 1913, but I’ve been unable to find names for them or confirm that either was built.

The Iowa Library Quarterly for January, February and March, 1914, says that the Tuesday Club, a women’s organization in Storm Lake, had raised funds for their local library by holding a candy and popcorn sale at the World, Princess, and Palace Theatres.

The original architects of the Vista Theatre were Wetherell & Harrison. The “Theaters Under Construction” column of the September 9, 1938, issue of The Film Daily said that the Vista was expected to be completed by October 1. The 650-seat project had been budgeted at $40,000.

The earliest announcement about the Vista Theatre might have been this item from the July 3, 1937 issue of The Film Daily: