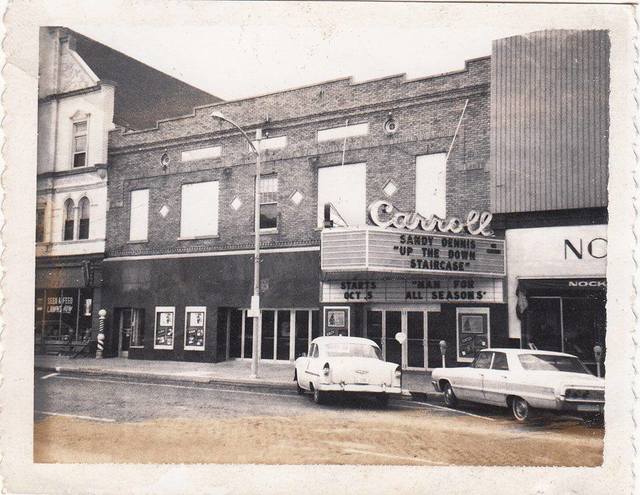 The Earle Theatre was opened October 11, 1927. It had 800 seats in an Italian Atmospheric style auditorium, designed by architectural firm John Latenser & Sons. It was equipped with a Wurlitzer theatre organ. In 1930 it was taken over by Pioneer Theatres. The Earle Theatre was extensively remodelled in 1942, but was badly damaged by a fire in October 1945.

Repairs and renovations were carried out by Pioneer Theatres and it reopened as the Carroll Theatre on May 7, 1946 with Cornel Wilde in “The Bandit of Sherwood Forest”. It seated 598. Operations was taken over by Fridley Theatres in the early-1970’s and it was closed and demolished in 1974.

This is a March 1974 follow up story which notes the demolition of the Carroll in summer 1973.

The new twin theater here, at the corner of Fifth and Main Streets, is expected to be opened by mid-April, theater owner Robert Fridley of Des Moines said. With the completion of the twin theater complex, Carroll will be one of the first towns in the state to have a newly constructed twin facility, Fridley said.

Plans now call for one of the two auditoriums to seat 370 persons, while the smaller of the two will have a seating capacity of 300. The former Carroll Theater building, located on Fifth Street between Main and Court Street, was razed last summer to make way for the new Carroll Civic Center. Because of this the city has been without an indoor theater since early summer.

Unless the Carroll 5 opened as a twin in 1973 and was later expanded to five screens. The Caroll 5 is at the same location as the twin theater discussed in ther articles.

When the Carroll Theaters (also owned by Fridley) were expanded from a two- to five-screen complex in 1998, Doug Burns and I wrote a few articles about the process. We also discussed our concern about how three more theaters might impact the Capri just 21 miles to the north.

The first article discusses the impending demolition of the Carroll to make way for the civic center. The second article confirms the demolition in 1974.

Plans for the grand opening of the new Carroll theatre tomorrow
night were complete today, Bill Arts, manager, announced.
Painters, carpenters and decorators were busy this afternoon putting on the finishing touches that will make the new amusement palace the “theatre of tomorrow”.
The new showhouse, replacing the Earle theatre which was destroyed by fire last October, is the first post-war theatre to be built in Iowa and has all the latest improvements, Manager Arts declared.
Described by its owners, Harold Field and the Pioneer Theatre corporation as “the theatre of tomorrow”, the motion picture house will provide every convenience for the comfort and entertainment of patrons.

The floor of the lobby and lounge are of soft-colored terrazo. Satin-finished chrome display frames grace the lobby. The ticket office is of bent glass. Entrance doors shine with full-view glass and stainless steel.
Tile-trimmed rest rooms have been installed. The ladies' room features a pink finish and the men’s, beige.
One of the outstanding safety features of this new theatre is a floor of solid, reinforced concrete.
The front construction is of brick and St. Cloud granite. Lobby and foyer walls are of tile and the stairs to the lounge and rest rooms are of concrete covered with carpet. As an added safety feature, the carpeting is recessed into the concrete floor to eliminate danger of stumbling.
The Carroll brings to this city the first theatre in this area featuring the new style bowl-shaped concrete floor. Beginning at the stage, it rises in pitch to the sldewalls and rear of the auditorium affording better vision for patrons.
Another of the many new features will be a new USAirCo mechanical refrigeration system unit which purifies the air and eliminates all
drafts. Separate units are used for the lobby, foyer, lounge and rest
rooms and air the auditorium.
* â€¢ *
Installed behind the screen is the new “Voice of the Theatre” sound speakers, said to be 200 per cent better than the old system. The stage is enhanced by full length gray satin drapes.
The Heart of the handsome new amusement place is the modern projection booth which houses two big Motiograph projectors and Strong projection arc lamps. Other new post-war features are the two Super-Lite lenses which give a third-dimensional effect on the screen. They have the effect of bringing the performers and backgrounds “almost to your fingertips”.

VETS STAFF THEATRE … Four veterans of World War II will form the staff of the new Carroll theatre when it opens here tomorrow. Pictured above are Manager Bill Arts, Assistant Manager Delbert Farrell, Projectionist Melvin Kinkaid, and Doorman Milo Baak. All of these men were associated with Pioneer theatres before they went into the services.

State Theatre Goes Back to Old Policy
With the opening of the new Carroll theatre, the State theatre will go back to its previous policy on theatre bookings, Manager Bill Arts announced today. Pictures will show Sundays through Wednesdays, and Wednesdays through Saturdays. Double features will be shown at the State with a Western picture on the week-end bookings. Admission prices at the State will be returned to 10 cents and 25 cents, as before.

A Statement From The Theatre Management
The building of the New Carroll theatre, with many deluxe features, was a new departure from the usual, pre-war theatre. The past years have shown the management that the public wanted this type of theatre, and plans were made for an ultra-modern theatre. Months
of careful study of all the newest type theatres, together with the experience gained in operating theatres, furnished a wealth of knowledge of what to include and how to design the New Carroll.
Harold D. Field, Pioneer showman, said, “It is with a sense of sincerity and genuine appreciation that our organization presents to Carroll the new Carroll theatre â€” the Theatre of Tomorrow".
“We dedicate it to you and with the sincere wish that you and your loved ones shall come to know it as your haven of entertainment, recreation and education.
"With all our abilities we have endeavored to make this a safe, comfortable and pleasing edifice. We shall be most happy if this offering meets with your full approval."
W. C. ARTS, Mgr.

To Reveal Winners Of Essay Contest
Winners of the essay contest – “What A Theatre Means to A Community” â€" will be announced on the stage of the new Carroll theatre tomorrow night during opening ceremonies.
The contest was open to all students in the county and many took part, Manager Arts said. Prizes will be a $100 war bond, six months
pass to both the Carroll and State theatres, and $10.
The winners will be presented on the stage when they are announced and prizes distributed.

The predecessor to the Carroll was the Earle Theatre. The 800-seat Earle Theatre opened in 1927 architected by John Latenser & Sons and owned by Earl N. Neu. Latenser’s Italian athmospheric theater with Cornthian columns melded in Lombardy poplar trees and two Pompeiian fountains along with Chris Fuchs’ murals set the tone. The 800-pipe Mighty Wurlitzer Pipe Organ made the Earle appear as if it were in a metropolitan area. Pioneer Theatre Circuit bought the Earle in 1930.

It was extensively remodeled in 1942 with a grand re-opening under Pioneer. After a damaging fire in 1945, it was remodeled and became the Carroll Theatre on May 7, 1946. Pioneer was bought out by Carroll Theater Inc. in 1963. Carroll Theatre purchased by Fridley Theaters Circuit in July 1970. In 1975, Fridley theater twinned the Carroll but it could show 70mm film. The theater had a long run but was fairly unrecognizable from any of its first three iterations due to modernizing.