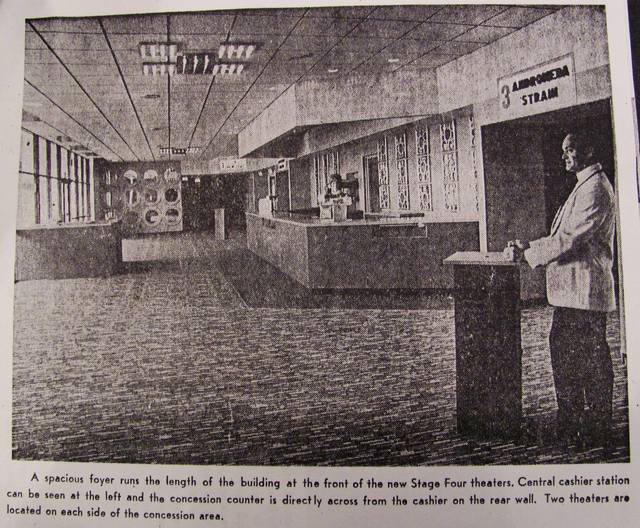 The Stage 4 was opened on May 28, 1971 by the Dubinsky Brothers. In 1990 it was operated by Excellence Theatres. Operations were taken over in 1991 by Carmike Cinemas and the theatre was closed on September 8, 2000.

Here is an article about the Stage 4:
http://tinyurl.com/y5ama4

Here is a 1976 ad from the Cedar Rapids Gazette:
http://tinyurl.com/2ajldw

Capri Cosmetology College moved into the building in 2003. Ironically the building they left when the moved from downtown was also a former theater building. It was the former Isis Theater.

it amazes me the track record of Carmike cinemas.

Carmike did not do too well in the Nashville market also.

From what see of CARMIKE i think they preform well in small towns.And i mean small towns with one Pizza Hut.

Carmike built a 12 screen stadium style theater less than a mile down the road. Once their leases were up on the older, smaller theaters they dumped them.

This opened on May 28th, 1971 by Irv & Sarge Dubinsky, who split off from AMC theatres. Taken over by Carmike Cinemas in 1991. Grand opening ad posted here.

Carmike took over the Stage 4 Theatres in November 1990, and operated the theater until closure on September 8, 2000, due to the ongoing Chapter 11 bankruptcy protection and the growth of multiplex theaters in the United States, as well as the popularity of the Wynnsong 12 being located a mile away from the Stage 4. The maintenance man, Jerry Morris, really wants to continue on running the theater but left with tears in his eyes on the causes of the closure.