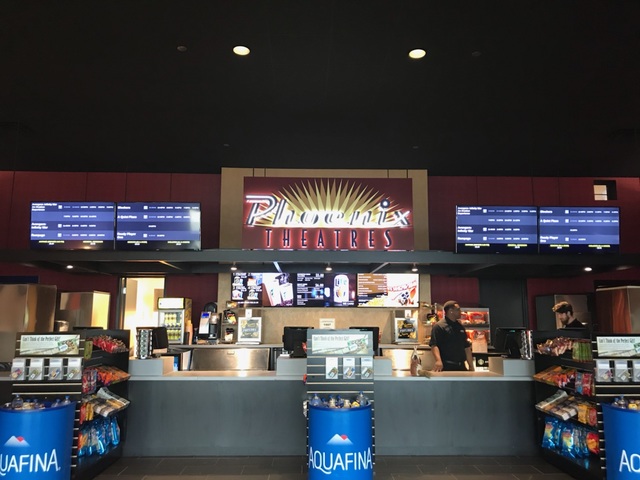 This was a replacement of GCC’s Kennedy Mall Cinema 1 & 2 which had opened inside the mall in 1970 (and has its own page on Cinema Treasures). The Kennedy Mall 6 is a separate building located on the northwest corner of the mall property. It was opened in 1987 by GCC. In June 1988 it was under the Essaness/Excellence Theatre banner.

In the early-1990’s Carmike Cinemas took over operations featuring first run features. During 2004 when the expansion and remodel of the Cinema Center 8 was completed the Kennedy Mall 6 became a discount house. The theatre was closed in May 2007, but soon re-opened as a first run cinema under independent management renamed Mindframe Theaters.

We were in Dubuque this past weekend and this theater sure looked closed.

Here is a view of the marquee:
http://tinyurl.com/2xowud

I can’t come up with any show times, so it may in fact be closed.

Kennedy Mall has been given new life. The theater has been remodeled into Mindframe Theaters, which will focus on showing smaller, independent and foreign films as well as playing some old classics as well. I really hope they’re successful.

Great, so it’s open again. I hope they do well.

Best I can tell Essaness/Excellence took over in June of 1988.

From the web site : http://www.mindframetheaters.com/

WE MADE IT! (mostly) Thank you everyone for all the support this Summer. It has been a record season. Although we fell short of our fundraising goal, we have gotten close enough and made a few deals to start installing projectors! We will not be able to do everything we wanted and in the next year or so there will be additional upgrades, so we will continue to need your support. Again, thank you.

The Owners Steve Thompson and Marcya and Grant Grudzina We love movies, pure and simple.

We are pleased to introduce Dubuque’s independent theater to our community. We know it’s not always possible to see the great films outside of the studio system released each year. The foreign films that are causing a stir. The critically acclaimed but small studio films that don’t play on multiplex screens long, if ever. The classic movies that were always best on the big screen but have not been accessible that way in years. In short, the movies you love but don’t see ads for on television.

But we are so much more than just an independent theater. Mindframe is a home for cultural events of many kinds. Live theatrical performances, private parties, concerts and everything else your heart and mind can conjure.

The General Cinema Twin Kennedy Mall Theatres were located within the shopping center. In 1987 a new 6 screen theatre was designed by GCC in a separate building in the north west corner of the mall property. The interior twin was then closed by GCC. The 1987 built theatre is the current building.

“The Rocketeer” was presented at the Kennedy Mall Theater beginning on the film’s nationwide release date, Friday June 21, 1991.