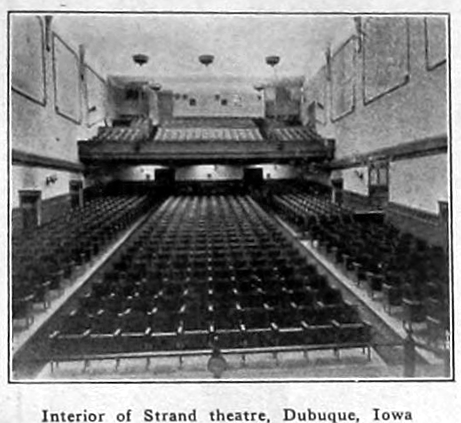 The Strand’s final curtain call was in the late 1960’s due to a fire. I attended it, the Grand and the Orpheum in Dubuque IA. Great theatres. The Orpheum has been restored as part of the Convention center on Main in Dubuque.

It is a shame that the theatre of today is a heartless multiplex with no heart or class. This was one of the best, it always made me awestruck as a kid.

If the Strand closed in the 50s or the 60s, it was only temporary, because Star Wars played there for multiple runs between 1977 and 1978. I saw it there 6 times near the end of the summer in 1977 after coming home from Y-Camp when I was 12. As kids, we would often sneak into the Strand via the side exit door along 12th Street.

And, I’m not confusing this with the Grand, which is where they played serials, Westerns and Abbot & Costello movies on the weekends for kids for a dollar. In fact, when I was just out of high school (Go Rams!), I remember seeing Footloose at the Grand as well and danced all the way home like a dork. I just loved the balcony seating at the Grand. ;)

Encyclopedia Dubuque says that the Strand Theatre was in a building converted from a church in 1919. It was taken over by the Dubinsky circuit in 1976, and the building was gutted by a fire in August, 1980. It remained vacant for a decade, and was demolished in 1989-1990.

I think someone got their wires crossed it was in the late 60s when closed, and it was a great theatre, at least my girl friend and I thought so!

Does anyone have a picture of the Varsity theatre on Loras BLVD.? I sure would like to see one!