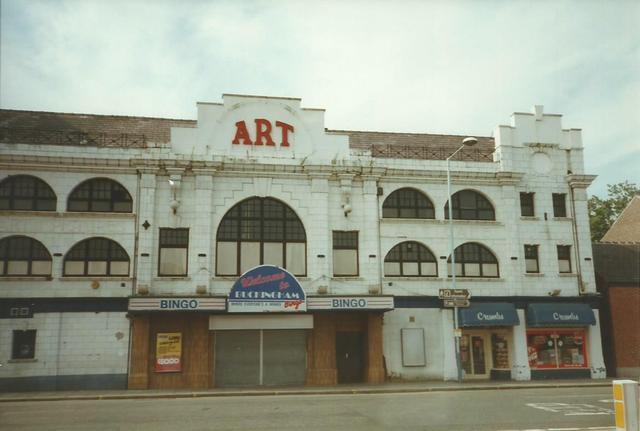 A remarkably complete survivor of a 1920’s cine-variety house executed in an elaborate style.

It is constructed of a brick clad steel frame under a slate and asphalt roof. There is a stage and full height flytower.

The exterior in white faience tiles is of three stories and nine symetrical bays. There is a round arched central window at 1st and 2nd floor level and the words ‘Art Pictures’ to the left and ‘Art Cafe’ to the right.

The center is crowned by stepped pedimental parapets. The ground floor level has been altered to allow greater access and light to the bar and originally the two outer bays had intricate arches with large keystones all done in faience.

Internally there is a very small foyer with marble stairs and a gilded metal balustrade with 1920’s style Roman decoration leading to the balcony and doors leading to the ground floor of the theatre.

The ground floor was divided between stalls and the cheaper pit (under balcony area) whilst upstairs the single balcony of 12 rows was returned along the side walls to the proscenium by way of two bow fronted boxes on either side. Unusually the projection box was downstairs under the balcony.

The proscenium arch is unusually deeply arched and is supported on Ionic pilasters which were also used to frame the boxes.

A deep, richly decorated, barrel vault ceiling covered the front area with a raised and domed ceiling over the rear of the balcony. All is encrusted with Baroque motifs. There are three ventilation roundels.

The fronts of the boxes and circle also contain richly detailed plasterwork in post Edwardian Baroque style. Although opened in 1922 it has the feel of an older era.

There was a large 1st floor cafe utilizing the balcony void area which is now a lounge. This was sometimes advertised as the Indian Lounge Cafe on account of is decor!

Films ceased in the 1960’s and building has survived use as a billiard hall, bingo casino, Chicago Rock Cafe, and since 23rd October 2009 as a pub in the J.D. Wetherspoon chain, known as the Art Picture House. The balcony is open but unused at present.

The former Art Cinema is a Grade II Listed building.

Albert Winstanley was born in Scotland in 1876. He was initially employed in a practice led by Arnold England but soon had his own company with offices at 49 Deansgate Manchester and in Lytham St Annes. From 1919 to 1928 Charles Hamilton Mackeith was his assisant. To the above list can be added a rebuild of the Art Picture Theatre New Mills(1921). He died in 1943.

More scanned images of the interior from 1988 here:–

Albert Winstanley built and lived in my childhood home in Lytham St Annes named Kingswear (we still have this house). The address is 53 Orchard Rd, St Annes, FY8 1PG. I believe he had offices on St Annes Crescent (Imperial Chambers) as an architect and surveyor for many years. He designed a theater in Crew- the staff of which were kind enough to send me scans of his sketches.