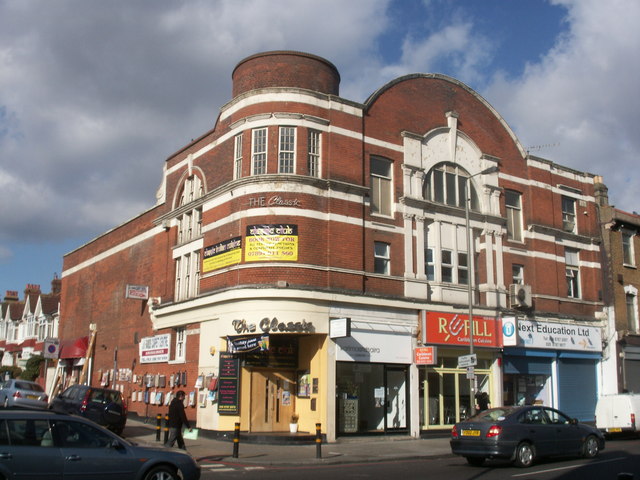 Located in the south London district of Tooting, close to Tooting Bec underground (Tube) station. The Central Hall Picture Palace opened on 14th October 1910. It was designed by the architectural firm of Norfolk & Pryor, headed by Edward A. Stone. The entrance, which was originally topped by an open dome, was on a corner. Seating was provided in stalls for 561 and circle for 233.

In 1923 it was re-named Central Cinema and was operated by Lion Cinematograph Ltd. It was taken over by S. Seeman by 1930 and was equipped with a Celebritone sound system. In 1936 it was taken over by Capitol & Provincial News Theatres Ltd. (later to become Classic Repertory Cinemas) and it was re-named Classic Cinema. They carried out an extensive refurbishment and the facade was given a ‘new look’, particulary stunning at night with its spectacular new neon display.

Often advertised as and also known as the Classic Tooting Bec because it was not in the centre of Tooting but was some distance north and closer to Tooting Bec Underground (tube) rail station.

The Classic Cinema closed on 21st March 1983 with Mel Gibson in “Mad Max” and “Mad Max II”. In its last years it had also been used for screening Asian ‘Bollywood’ films on Sunday mornings/afternoons.

The building was closed up for a while, then the stalls area was converted into retail use and the circle became the Classic Nightclub from 1987, which remains in use today.

The only cinema that I know of that sold cups of tea in the auditorium.