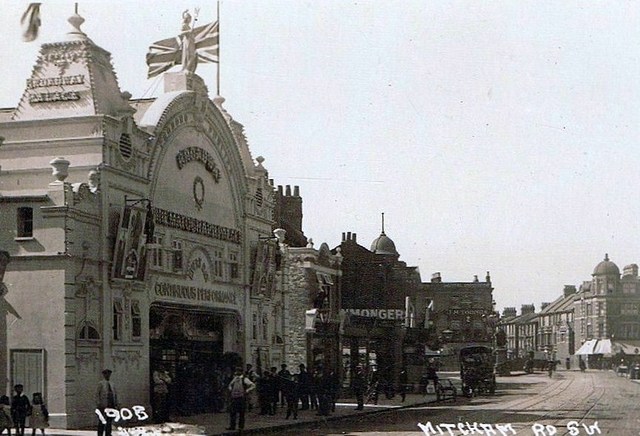 Located in the south London district of Tooting. The Broadway Cinematograph Palace opened in 1912. The facade was highly decorated in white stone. A curved arch over the entrance was topped by a statue of Britannia and on each side there was a squat tower feature. Inside the auditorium the seating was on one level and a pipe organ accompanied the silent films. It was built for and operated by Browning, Hillier & Batley.

The name was changed to Broadway Palace Theatre in around 1936 and the operator was given as A.H. Batley, one of the original operators. It was the first cinema in the area to install sound, when in 1929 a Cinephone system was fitted.

The Broadway Palace Theatre suffered extensive damage by a German rocket bomb in 1944 which destroyed the front of the building and also hit the Methodist Central Hall on the opposite side of Mitcham Road. It never re-opened as a cinema and after the end of the war a new plain front was put on the building and it was converted into retail use. In 1996 it was converted into a pub named Gordon Bennett and today there is nothing left to see of its cinematic past. By June 2012 it had become a Sam 99p shop.