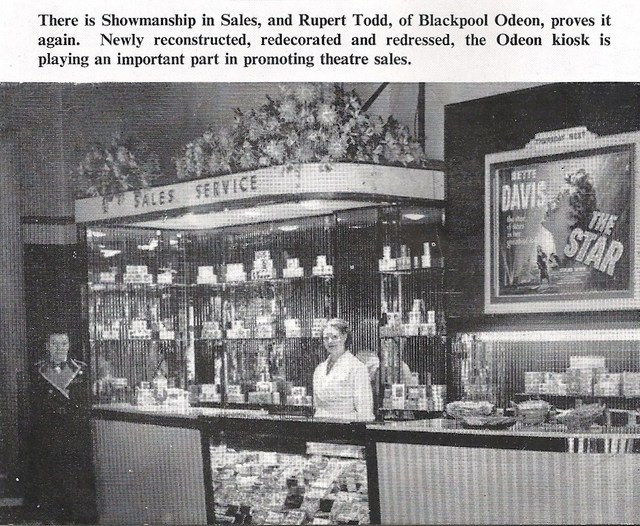 This was the largest of the original Oscar Deutsch built Odeon Theatres, seating 3,088, with 1,684 in the stalls and 1,404 in the balcony. The Odeon opened on 6th May 1939 with “Three Smart Girls Grow Up” starring Deanna Durbin. The main façade and entrance is on Dickson Road but a second entrance for front stalls patrons was provided on Springfield Road. Provision was also made for an organ but this was not installed until 1946, when a Conacher 4Manual/12Ranks with grand piano was installed and opened by Al Bollington. The instrument had been transferred from the Ritz Cinema, Southend-on-Sea, Essex.

The Odeon was triplexed in 1975 with the two smaller screens 2 and 3 contained completely within the the under-balcony area of the rear stalls. This meant that from the balcony located screen 1 there was no visible change to the auditorium. Even the wonderful Art Deco style lights remained in full working order until the day of closure. The spacious café at first floor level was converted into an equally spacious bar.

Even towards the end of its cinema life it was possible to fill the 1,300 seat (former circle) screen 1 (“Titanic” had especially large queues forming and extra performances added).

Odeon built a new multiplex on on Rigby Road, opposite the tram depot in the south of the town centre, and this original Odeon building was closed on 5th December 1998 with “Babe, Pig in the City”, “Ronan”, “Blade” & “Mulan”. It was neglected and left in a rather poor state of disrepair.

It was boarded up for several years until it was acquired by Basil Newby who’s Pink Leisure Company converted the former circle into a gay nightclub;Flamingo’s, a gay bar in the former circle foyer and Funny Girls; a drag-cabaret theatre in the former stalls area which opened in 2002. In August 2018 Basil Newby’s Pink Leisure Company was put into receivership and the business was temporary taken over by Thwaites Brewery. Thwaites took over the ownership of the building in January 2019 and renovations are being carried out while all its facilities remain open. New signage in the style of the original 1930’s ‘Odeon’ signage is to be installed on the building.

The Odeon is a Grade II Listed building.

I’ll be there again mid-September camera in hand.

A photo dating to just before the Odeon was tripled in 1975 here:–

This building looks better today than it proberbly has done in the last 20 years. All thanks to the pink pound.

Nov 2007 photo with Funny Girls at this theater:
View link

So much of this still intact its amazing! Great pics Ian, thanks again!

The Odeon, photographed in 1985:
View link

A couple more digitally scanned images from 1992 when it was still operating as a cinema:–

From a photograph I am looking at as I write this, the Conacher organ in Blackpool Odeon actually had four manuals rather than two and it was also equipped with an incredibly ugly (well, to my mind) “batwing” illuminated surround. As already stated, the instrument was transferred from the Ritz Southend in 1946. Rumour has it that originally, a large 5 manual Compton organ had been ordered (shades of Leicester Square here?)and would have been installed towards the end of 1939 (thinks: were Comptons way behind with their workload here?). Apparently this mighty instrument had been dispatched by rail from London to Blackpool via Manchester, but whilst the train was left overnight in a goods yard, there was an air raid which destroyed both train and organ. Looking at the discrepancy in the dates, it does seem a little far-fetched and perhaps someone better informed than I would care to comment on this.

Have load at picture of the New sales Kiosk of 1953