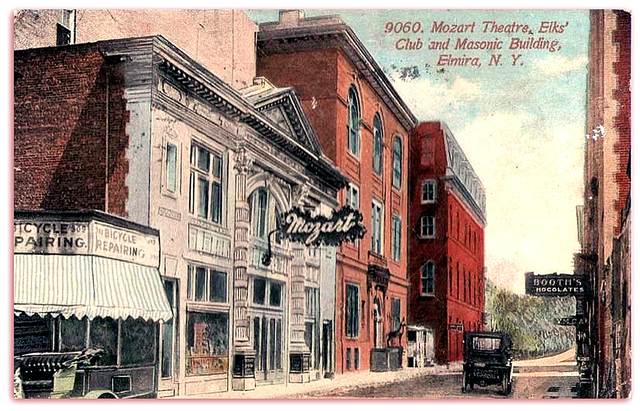 Located on E. Market Street near Lake Street, the Mozart Theatre was opened November 23, 1908. At some point it was renamed Strand Theatre. (there were two other Strand Theatres in Elmira: one opened in 1915 the other in 1923).

The former Mozart Theatre/Stand Theatre was closed May 16, 1959 with a concert by the Emira Civic Chorus. It was demolished in 1967.

From the early 1900s a postcard view of the Mozart Theater in Elmira.

According to “The Encyclopedia of the American Theatre Organ”, pg. 630, the “Mozart Th.” in Elmira, New York, had a Smith theatre pipe organ installed in 1914.

The book does not list the size of the organ (# of manuals / # of ranks), since that was apparently not known at publication time, but they do give the blower info, which was a Simplex, serial #C346, 1 horsepower, giving 10" of static wind pressure. The number of horsepower of the blower motor indicates to me that this was probably a smaller size theatre organ, maybe around 4 ranks or so.

This was apparently amongst the very earliest installations made by this new firm, the first Smith company, which was operating in North Tonawanda, New York at this time. (They only installed a relatively few organs before moving to Chicago to partner with the Seeburg piano firm)

It was not THE earliest Smith installation, since that honor goes to a handful of installations made in 1913 (including the prestigious Shea’s Hippodrome in Buffalo), but 1914 is still pretty dang early, since the majority, out of all of the Smith instruments sold (of the various Smith firms) appear to have been the numerous Seeburg-Smith organs sold between 1916 and 1921, and then also the few dozen Leathurby-Smith organs sold up and down the West Coast from 1924 through 1928.

Does anybody know what happened to this organ, and where it (or its parts) is/are today? Thanks!

The Mozart Theatre must have loved their Smith pipe organ, as evidenced by this endorsement reprinted on a page of a very rare Smith organ catalog (which itself is reprinted on pg. 627 of Mr. Junchen’s book):

“It is with pleasure I can write you telling you how highly pleased we are with the results obtained with your splendid instrument installed in our Mozart Theatre two years ago. Our business increased daily and much credit is due the Smith Unit Organ for a share of the credit of the wonderful showing.” – M. D. Gibson, Manager Mozart Theatre, Elmira, N. Y. Dated September 30, 1916.

*The organ had a Kinetic blower, not a Simplex blower, sorry!

Construction was about to begin on the Mozart Theatre when the Elmira Star-Gazette published an article about the project in its issue of April 8, 1908, which can be read in this PDF of the paper’s second page. The architect of the Mozart Theatre was Albert E. Westover (though the article mistakenly gives him the middle initial C instead of E.)

The December 19, 1908, issue of The Billboard noted that the Mozart Theatre in Elmira had opened on November 23.

November 21st, 1908 grand opening ad in the photo section. Article from Joe Vogel can be found at

The Mozart is same theater as the Strand.

Actually the theater that opened in 1906 as the Mozart was renamed the Strand at some point, which we know as we have photos of the building displaying each name at different times, but there was also a Strand Theatre opened in 1915, when the Mozart was still in operation, and another Strand opened in 1923.

What we don’t know yet is when the Mozart was renamed the Strand, or whether the 1923 Strand was a remodel of the Mozart or of the 1915 Strand, or was another theater altogether. So far we have only one of the Strands listed at Cinema Treasures. The Mozart page obviously needs the aka Strand added, but somebody will have to research the history to determine when the name changed, how long it operated under that name, and what became of the 1915 Strand.

This article from the Elmira Star Gazette says that the Mozart originally had 1,398 seats, “…eventually became the Strand….” and also says that “[t]he last big night was May 16, 1959, when every seat was filled for an Elmira Civic Chorus spring concert. The building was razed in 1967.” There was nothing about when the Strand had closed as a movie theater.

The article also says that the Mozart was on Market Street east of Baldwin, so it must have been between Baldwin and Lake. That means it was probably at the 313 E. Market address we have listed on the Strand page. It does seem likely that the Mozart became the Strand in 1923, with a remodeling by Leon Lempert Jr., at that time.