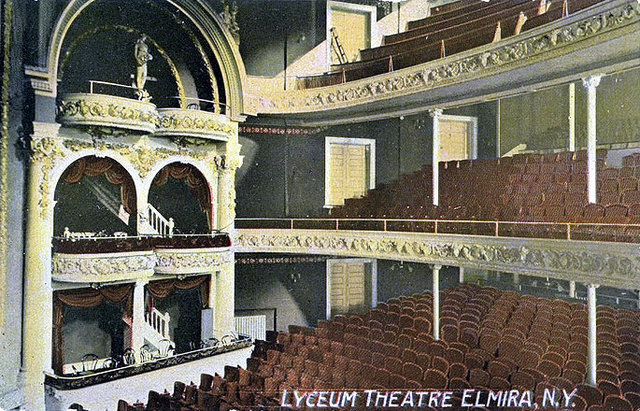 Auditorium is heavily decorated with Beaux-Arts influenced plaster moldings. Two balconies, upper balcony has benches. Pre-cantalever with posts in the seating area. Three levels of box seats. Large auditorium. The Lyceum Theatre was built in 1904 to the plans of architect Fuller Claflin, and replaced an earlier Lyceum Theatre destroyed by fire. It was still open as a movie theatre in 1926.

The Lyceum Theatre is listed in the 1914-1915 edition of American Motion Picture Directory.

The Lyceum built in 1867 and remodeled to Leon Lempert’s design in the 1890s was completely destroyed by fire on March 6, 1904. But according to the April 9, 1904, issue of Real Estate Record and Builder’s Guide, the house was to be rebuilt:

“Fuller Claflin, 1133 Broadway. New York City, and B. C. Horn are making plans for a new Lyceum Theatre to replace the one recently burned in Elmira. Colonel D. C. Robinson is the owner of the property.”

In the quote in my previous comment, B.C. Horn should read E.C. Horn. I copied and pasted without noticing the error in the scan.

Here is a brief item about the Lyceum from the September 10, 1904, issue of the New York Morning Telegraph:

“Fuller Claflin, architect of the Amalgamated Theatre Building Association of 1440 Broadway, left last night for Elmira to close contracts for the building of the new Lyceum for Col. D. C. Robinson.”