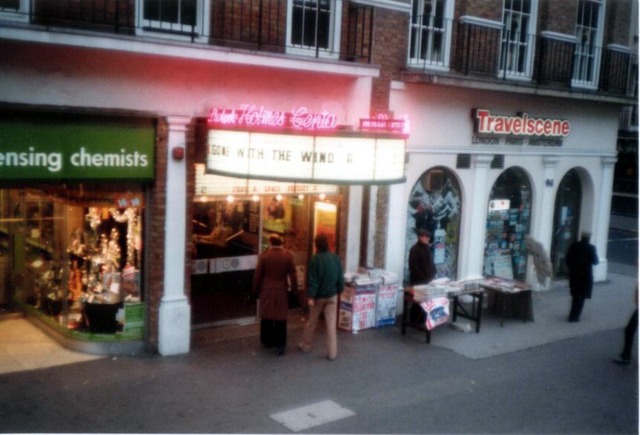 Built on the site of the Classic Baker Street (which has its own page on Cinema Treasures), the Sherlock Holmes Centa 1 & 2 was opened on 2nd March 1978 by the Cinecenta chain. The opening films were Marie-France Pisier in “The Other Side of Midnight” & George Segal in “Rollercoaster”. Seating was provided for 123 and 117 seats. They were taken over by the Leeds based Star Cinemas circuit in December 1969. Closed in September 1983, it was gutted and remodeled, re-opening on 3rd February 1984 as the Screen on Baker Street. The re-opening films were a premier presentation of “Lianna” and a revival of Hitchcock’s “Rear Window”. Screen 1 now has 85 seats and Screen 2 has 77 seats.

In 2009, it was taken over by the Everyman group and renamed.

Built on the site of the Classic Cinema 1937-1973 (which was also the head offices of Classic Repertory Cinemas), this replacement cinema opened on 2nd March 1978 as the Sherlock Holmes Centa 1 & 2 and is located in the basement of the new building. It was operated by the CineCenta group of art house cinemas. Originally the seating capacities were for 123 & 117. From December 1979 it was operated by Star Cinemas and it closed on 7th September 1983 with Ben Kingsley in “Ghandi” and Dustin Hoffman in “Tootsie”.

It was taken over by independent exhibitor Romaine Hart and added to her ‘Screen on….'cinemas after being gutted and redesigned. It re-opened as the Screen on Baker Street on 3rd February 1984 with Linda Griffiths in “Lianna” in the 95 seat Number 1 cinema and “James Stewart in "Rear Window” in the 100 seat number 2 screen.

This is another recent photo of the Screen:–

The cinema has now been rebranded Everyman Baker Street with new signage on the marquee
http://www.flickr.com/photos/woody1969/4301160793/

Exterior and lobby photos from February 2015.

I was a projectionist there when it was a Classic

I sat in Row 4, just halfway. For its size the screen is quite impressive when out in Scope. It is full wall-to-wall with movable side masking. If you choose a seat well, it is a good place to see a film in.