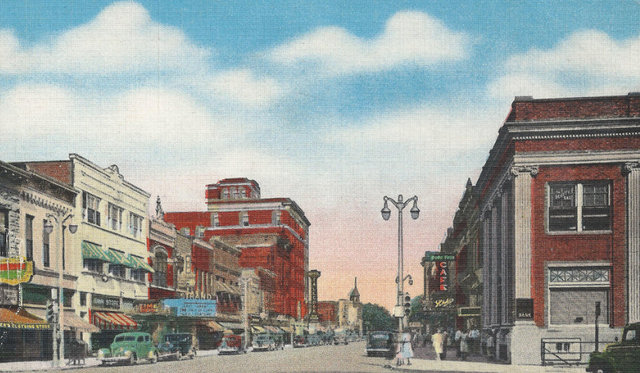 The Strand Theater opened in the early-1920’s by A.H. Blank Theatres who became a subsidiary of Paramount Pictures Inc. Seating was listed at 542. During the early-1940’s it was operated by Mort Singer Theatre Corp. During 1945 the Grand Theatre and the Capitol Theatre fell under the RKO banner until 1950. The Strand Theater closed during the mid-1950’s

I’ve found a reference to a Strand Theatre in Marshalltown being outfitted in 1915. Owners of the theater ordered 714 opera chairs from the Progressive Seating Company of Chicago on November 3, 1915. No address was given for the theater, so I don’t know if it was this same Strand or not.

Here is a photo of Main Street in Marshalltown, probably from the late 1930s, with the Strand Theatre at left. The facade does look more like something from the 1910s than from the 1920s, so most likely this was the theater that was being outfitted in 1915. It probably opened late that year or in early 1916.

“A. H. Bank” in the theater description should read “A. H. Blank.” Paramount affiliate Blank probably operated the Strand from the time of its opening, and then bought it outright in 1917 as noted in this item from the December 29 issue of Motography that year:

“Ingleduc & Jensen have sold the Strand Theater at Marshalltown to A. H. Blank of Des Moines who will continue to operate it.”

I found a reference to an O. L. Ingleduc who was mayor of Marshalltown in 1910. The vintage photo of Main Street shows that the Strand’s site is now under the footprint of the Great Western Bank building, so the theater has been demolished.

Anyone know the film projectionist in 1984 at GCC General Cinema Valley View ? Or anyone that worked there ?