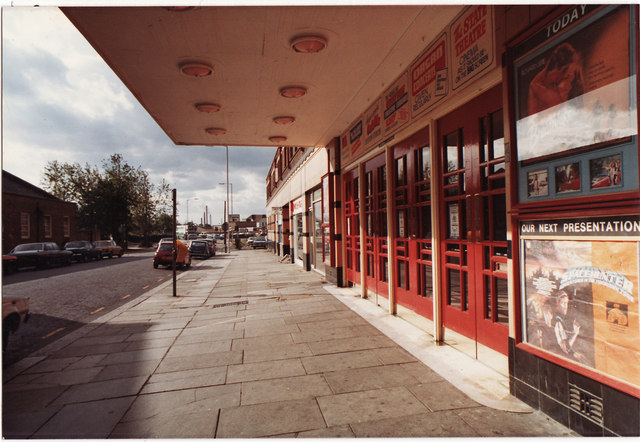 The State Theatre, Grays, Essex opened on 5th September 1938 with Dorothy Lamour and Jon Hall in “The Hurricane”. It was built and operated by the Frederick’s Electric Theatres circuit. The magnificent State Cinema remains a large and unaltered building with seating for 2,200 with 1,400 seats in the stalls and 800 seats in the circle. It is equipped with a Compton 3Manual/6Ranks organ with Melotone attached. The organ console has a ‘Rainbow’ illuminated surround and is on a lift, with the organ chamber located under the stage. The State Cinema has a fully equipped stage and there are 3 dressing rooms. There was a 50-seat restaurant in the circle foyer level. In 1988 the State Cinema was a location shoot for a sequence in the film “Who Framed Roger Rabbit” starring Bob Hoskins. At that time the Compton organ was still played every evening performance (except Sunday). The State Cinema was closed November 30, 1989 with Dennis Quaid in “Great Balls of Fire”.

In 1993 the foyer was used for a while as a nightclub named Charleston’s, and the auditorium saw use again on two occasions for concerts by David Essex and Suzi Quatro. The 1998 music video of “Deeper Underground” by Jamiroquai for “Gozilla:The Album” was filmed in the State Cinema.

In 2001 Morrisons Supermarket chain purchased the entire building and adjacent car park to use the car park as an extension to their own adjacent car park. In 2006 a property company purchased the building for £550,000. It has been unused for over 30 years, and there have been several break-in’s. The Compton organ, projectors and all equipment remain in the building, but during one of the break-in’s, around 2011, organ pipes from the organ chamber under the stage were stolen by metal thieves.

The building is Grade II* Listed and is one of the most endangered buildings on the English Heritage ‘Buildings at Risk’ list.

In October 2015 it was announced the State Cinema had been purchased by the J.D. Weatherspoon chain of pubs and details of their plans were published in December 2017. Delays over how it would be transformed into a pub while retaining its listed qualities were wrangled over for several years between J.D. Wetherspoon, English Heritage, Cinema Theatre Association and Thurrock Council. The £5 million plans for the conversion were finally approved in July 2021. The pub will have 475 seats, and a further 50 seats on a roof garden. The circle foyer will be converted into toilets. The building will receive a new roof. The Compton organ will be renovated and repaired to playable condition, with the console in the ‘raised’ position in front of the stage. The projection box will be preserved. A roll-down screen will be installed and all damaged plasterwork will be repaired using plaster.

In December 2022 J.D. Wetherspoon announced that they had abandoned plans to convert the State Cinema into one of their pubs and the building would be put up ‘For Sale’. Work had already been prepared on the restoration and the auditorium is filled with scaffolding. It has been reported there is a large hole in the auditorium roof measuring several feet which is allowing rainwater into the building as well as pigeons. The Cinema Theatre Association has sent an appeal to the local council to ask them to serve a notice to Weatherspoon’s (as the current owners of the building) to repair the hole on this Grade II* building. There is news that an organ enthusiast has removed the Compton organ (its pipes & console) from the building to be placed in safe storage.

A few more photographs of the State, from circa 1988, before it closed. Interiors and exterior and organ.

I have sent an e-mail to Thurrock Council asking for info and/or help with an idea I had.

There is a cinema museum currently based in London that has to move home and could well cease to be if it can not find suitable new premises. The State Cinema building would be an ideal location. I have e-mailed the museum to confirm that they are still looking for a new home but so far that is it. This would be an ideal opportunity for both parties ( OK, Grays isn’t London but it has a good rail link to and from London).

This would fit in nicely with the planned (if Thurrock Council keep their promise) Thurrock Film Network.

If anyone is interested in helping me with trying to get these and other local projects started, please e-mail me on .uk Thanks.

There is now an online petition at www.statecinema.co.uk

Please sign if you would like to see one of Englands last fully original picture palaces saved from being turned into a health club or some sort or residential property.

Up to date photos

Quentin Bellamy Which one is that?

Simon Gledhill How has it been destroyed?

Peter Hammond Metal thieves broke in in July and have stolen most of the pipework. They even bent some of the tubas in half and left them on the stage presumably waiting their return to collect them. They also took other metal items in the building I believe. Console and other parts still in situ and OK I believe. We have been lobbying the local authority for ages to make sure the place was secure, especially after the caretaker died earlier this year. A few days ago new security measures were put into place – somewhat late!!! Simon please can the COS join forces with us to demand some action regarding the State?

Simon Gledhill Peter, let’s discuss privately. I will e-mail you.

Gary Davies This is a disgrace.

Stephen Dutfield It’s terrible news. Do we know what the state of play is with insurance? It’s not beyond the bounds of possibility that the stolen pipework could be replaced from Compton material available from other sources, although of course it would never be the State organ as it was. I just hope nobody has the idea to dump what’s left of it because the pipes are missing.

Quentin Bellamy What a calamity!

It appears that the State has now been purchased by JD Weatherspoons. This has been reported on the “save the state” Facebook page.

extensive article on the plans https://www.essexlive.news/news/essex-news/grays-state-cinema-work-begins-2926408

Wetherspoons has made a u-turn on making it into a pub. That means it will not be a Wetherspoons any more.