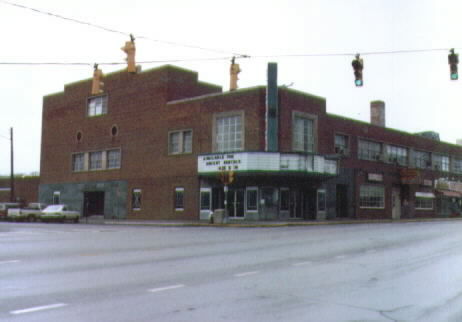 The Haunted Fun House on Atlantic Avenue used to be the Beach Theater during the golden age of movie palaces. It closed in the 1980’s.

The Beach Theater was opened around July 1946, and was designed by architect Vernon A. Moore, with A.O. Budina as consultant architect. There were 860 seats in the orchestra level and 340 seats in the balcony.

Beach Theater is scheduled to become another cheesy Souvenier Shop on the Virginia Beach Oceanfront. The Haunted Funhouse locked up shop 2 years ago this Halloween and the VB Fire Marshall has declared it as Fire Hazard and the building is slowly but surely crumbling away. Already drafty spots have been found letting in outside air. This theater needs a multi million dollar face lift and needs a patron who will keep it open as a movie house.

There was a short lived attempt to turn the Beach into a repertory theatre with foreign and classic films in the early 1980s. I don’t think it lasted more than a year but they did do a nice job, even if the audience just wasn’t there for it.

According to an article of 8 January 1982, the Beach Theatre would be closing within a week. Plitt Southern Thaters, which had been leasing the building, had decided not to renew its lease because attendance was only about 50% of what the management needed to draw to break even. The same article indicates that the Beach had been opened in 1947 in “a shiny marble and brick building” and relates that the marble had soon been replaced with more brick after being damaged by an automobile collision. “For most of itse existence, the beach specialized in ‘family-type Disney movies’ that catered to the interests of vacation families, the article stated, but had lately switched to "more adult, contemporary fare.” Relatively high ticket prices, changing entertainment tastes, and competition from local “shopping center theaters” were cited as contributing the Beach’s demise.

I grew up in Va Beach during the 60s and have many happy memories of the Beach and the Bayne. The Beach got the better movies, the Bayne the “B” features. The Beach was parent-approved and the Bayne was “off limits” as 16th street was the “bad section” of town. All the more fun to sneak down there. The 1st movie that I saw at the Beach was “The Misadventures of Merlin Jones” and at the Bayne, “King Kong vz. Godzilla”.

I saw “American Wearwolf in London” at the theatre, when it was released. It was very dark in the theatre on that Halloween Night. And only a few people were attending. I almost jumped out of my seat if I heard a pin drop behind me. It was a great movie.

That’s how I recall the theater through the 1970’s. The more popular films seemed to be at the Beach and the not as popular at the Bayne. I saw many movies at the Beach.  I remember seeing The Empire Strikes Back, the Goodbye Girl, as well as revivals of The Sound of Music and Pinocchio at The Beach. The parking on 25th Street could also be easier which I’m sure made the theater more popular.

The opening to the left of the large window with the small glass panes(Atlantic Ave side) was the access to the office portion of the building. At one point my parents dentist was there. The large opening on the 25th Street side under the three side by side windows is where patrons exited following a movie. The three windows were for the lounge. The theater had a stage but I suspect it was for community productions or corporate events. I was never in the theater to see the stage used for anything other then to house the screen.

Listed as the Beach Repertory Theatre in the 1987 city directory.