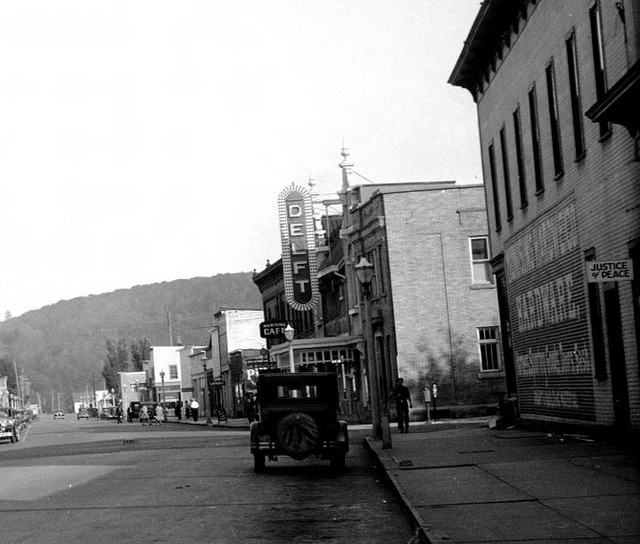 Here is an article from the Ironwood Daily Globe dated 7/8/30:

Officers of Delft Theaters, Inc., said Saturday that for business reasons they have set aside, temporarily, the plans which they announced a few months ago for building new theaters in Marquette and Escanaba. It was stated, also, that specifications had been sent to contractors and bids asked for remodeling the Strand Theater in Escanaba. It is expected that this work will be started by the middle of July.

The Delft Theater in Munising, it was announced, will be redecorated and improved by the installation of Western Electric sound picture equipment, the same as that used in the Delft Theater in Marquette. This equipment will, it is expected, be ready for operation early in August. Rumors current in Marquette for some time that Delft Theaters, Inc., was about to become affiliated with a large chain of theaters and that 11 Delft theaters in the Upper Peninsula would be sold or leased to a chain organization were declared Saturday by Delft officials to be false. No negotiations are pending for a change of ownership of the Delft properties, they said.

There are some vintage photos here:
http://tinyurl.com/68u2hj

An item in the September 4, 1915, issue of The Moving Picture World said that C. J. Butler of Ishpeming had hired architect D. Fred Charlton to design his new theater there, and added that Charlton had been the architect of the Delft Theatres in Munising and Marquette.

Demetrius Frederick Charlton was, in 1916 when the Butler Theatre opened, in the partnership Charlton & Kuenzli with architect Edwin O. Kuenzli, but I don’t know when the partnership was formed. Charlton apparently used the name D. Fred Charlton professionally, as that is how he signed his application to practice architecture in Michigan, and how he was listed in the AIA'a American Architects Directory.

This website has a few vintage photos of the Delft. One, taken in 1941, shows the theater playing “The Night of January 16th”.

Address was 102 E. Superior not 182. The 1968 photo I added shows 100 next door to the right. Street view shows the numbers increase to the left of that. Peoples State Bank of Munising is on the site today. Street view also shows the numbers jump from 132 to 202, so no 182 exists, as that would be the middle of an intersection.