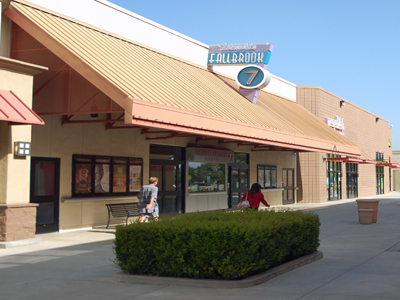 This became the lone West Hills venue in the late-1980’s, effectively replacing the defunct Mann Fallbrook Twin Theatre, which was shut down by 1985 within the Fallbrook Square shopping mall.

Originally opened December 9, 1988 by General Cinemas as a seven-screen multiplex. Under a shadow of the late-1990’s megaplex building boom, it was expanded by yet another three screens in hopes of keeping up with the competition, especially AMC’s Promenade in nearby Woodland Hills, whose 16 theaters of stadium-style seating had really raised patrons' expectations.

By 1999, word had spread that in a cost-cutting move, the GCC chain planned to essentially pull out of the West Coast, leaving numerous venues to literally fend for themselves. Some theaters were shut down and/or razed. Other venues continued operating as independents for however long they could last. And those truly fortunate ones, like Fallbrook, were purchased by another theater chain.

Enter the Laemmle family on December 7, 2001, who agreed to purchase Fallbrook from GCC, then subsequently closed/tore down those three most recently-built theaters the following year to create retail space (as a source of lease income) while redirecting their newly acquired venue towards foreign films, art house fare and midnight movies like “The Rocky Horror Picture Show”.

As of 2006, the theater is open with all its seven screens intact, continuing to be a productive part of Fallbrook Square. It was taken over by AMC on March 6, 2013.

Where were the 3 additional screens located in relation to current screens?

The 3 screens that were added are on the northeast side of the building, just to the right of the main entry doors. They each seated about 125-180, and were the smallest in the complex. When Laemmle Theatres took over operations, those screens were converted to retail. They are currently a Pacific Sunwear and a Curves gym.

This week Laemmle Fallbrook is showing The Untouchables in 70mm! Mon to Wed, 3 shows a day. Was hoping to get here before AMC took over, and this is a perfect way to usher this cinema out in its current form!

the AMC Fallbrook 7 is closing on July 7th for the remodel and updating. I was there on Sunday night and they had a sign on the box office. The cashier told me that they expect the cinema to be closed about two months until the reopening sometime in September.

AMC Fallbook 7 is reopen today. Here is an article from the LA Times. Looks it is all reserved seating, with those big red AMC recliners, but thankfully no dinner service….I will check it out this week and get some pics if I can.

I went here yesterday to see Rush. The renovation they did really is amazing. The main difference is when you enter the lobby, there is only one hallway back to the theaters other then the two that were there before. That is the only major structural difference i saw.

We were in Auditorium #3 which now seats 142 people. They did not dig into the ground to add stadium. They kept the slope they had, and each row is about 6-8 inches above the row in front of it. This is not stadium seating, but more of a hybrid of slope and stadium. The seating is great…red recliners that work and are very comfortable. It looks like they took three of the old rows to make one of the new ones.

The screens are all bigger. Auditorium 3, 4 (162 seats) and 5 (162 seats) are all side masked…or should I say common height since there is no masking. I peeked into Auditorium 1 (85 seats) and they have a common width screen, which was there before. It looks as if they used as much real estate as they could for each screen which is terrific. What was odd, was that the screen seemed curved at the edges.

The sound was terrific, i really noticed the bass where before I had not. The cost of $8 was totally worth it and I think i have my new go to cinema. All seats are reserved, and there were only 5 other people for my showing.

It now looks like an AMC. The wood paneling is gone and all traces of GCC are wiped away.

I used to work at this theater back when it was a GCC. One of its biggest drawbacks, I feel, was that people probably had a hard time locating it, as it was tucked away behind a Sport Chalet.

I like what AMC did with the place, except that the front row seats are too close to the screen. AMC seemed to course-correct with later shoebox-to-recliner seat conversions; in theaters such as the ones in Burbank and Santa Monica, even the front seats are comfortable. 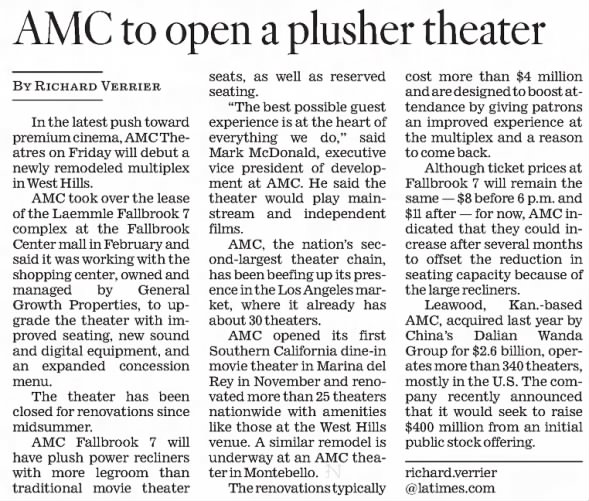