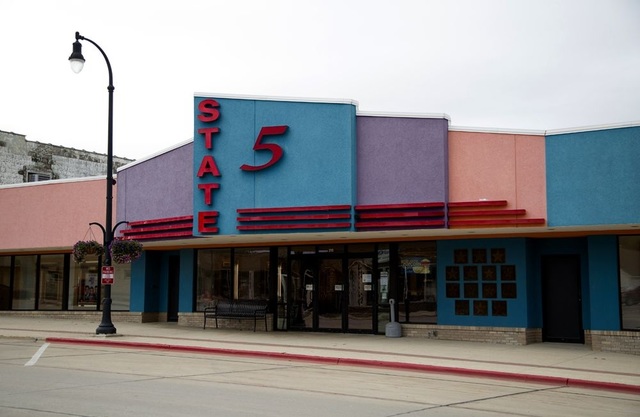 Originally opened as a three screen theatre. There is also a listing for the Algona Theatre at 216 E. State but I could find no info on that theatre.

So we have three Algonas or former Algonas, two at this address and one at 216 E. State. Here is a May 1937 article from the Kossuth County Advance:

The State theater has been leased by the Algona Theater Co., which has been operating the burned Call theater. Manager N.C. Rice will take charge of the State with a show beginning Sunday. The Iowa theater on Thorington street will be operated as usual.

Plans are now under way for rebuilding the Call theater, and when the new theater is completed it is planned to make the Iowa theater building into store quarters. The deal for the lease of the State was signed by the Algona Theater Co. and Gail Pettit, owner and builder of the State, at 2 a.m. this morning at Des Moines.

Feature pictures will probably be shown at the State this summer as the Iowa is too small to accommodate crowds. The opening Sunday show at the State under the new management will be Hit Parade, with the Eddie Duchin, Cab Galloway, and Lucky Strike orchestras, Frances Langford, Phil Regan, Molasses and January, Al Pierce, and seven other radio acts.

The ownership of the State theater building is retained by Mr. Pettit, but the equipment was purchased by the Algona Theater Co. The lease, it is understood, is for a long term of years.

According to local residents, the State 3 Theater is in the former Ben Franklin, which was remodeled by Fridley a few years ago (c2004) to be a movie theater.

If kidinkcmo is correct, this theater should not have the aka Algona Theatre. It should be listed as the State 5, with the aka State 3. As far as I’ve been able to discover, the only Algona Theatre in Algona was the one opened in 1951 at 216 E. State Street, on the site of the Call Theatre, which had opened as the State Theatre in 1936 and burned down in 1950.