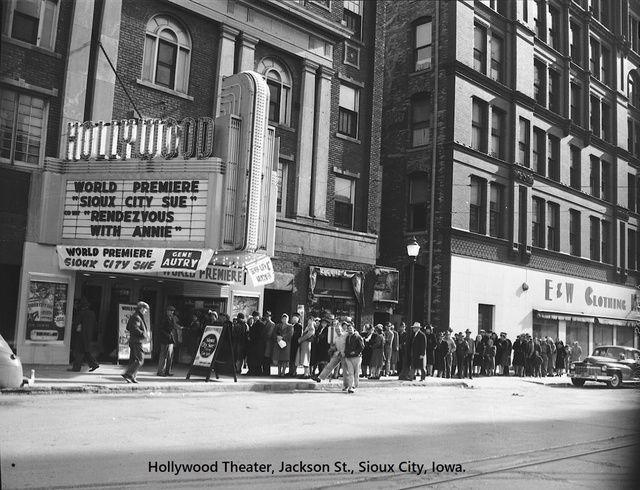 1946 World premier showing of “the picture all Sioux City is waiting for” at the Hollywood Theatre starring Gene Autry and Lynne Roberts.

The Hoolywood Theater was torn down in the late 1960’s because of the City of Sioux City had an urban renewal project for most of the downtown area of Sioux City.

It was the third largest motion picture theatre in Sioux City with the Orpheum and Capitol theaters being larger.

First run movies were shown, including “Lawrence of Arabia”, “Goldfinger” and “How the West was Won”.

Managed by Phil Keough, city manager of the company from Lincoln, Nebraska, the Hollywood was the second theater in the chain, including the Orpheum in Sioux City,.

dallasmovietheaters: A timeline of Harold Spitznagel’s works on the web site of the firm he founded, TSP, says that the only movie house he designed was the Hollywood Theatre in Sioux Falls, South Dakota (Cinema Treasures page.) This theater of the same name in Sioux City must have been designed by someone else.

This opened as Princess in 1914 and reopened as Hollywood in October 1946 and taken over by Dubinsky theatres in 1955. Article: