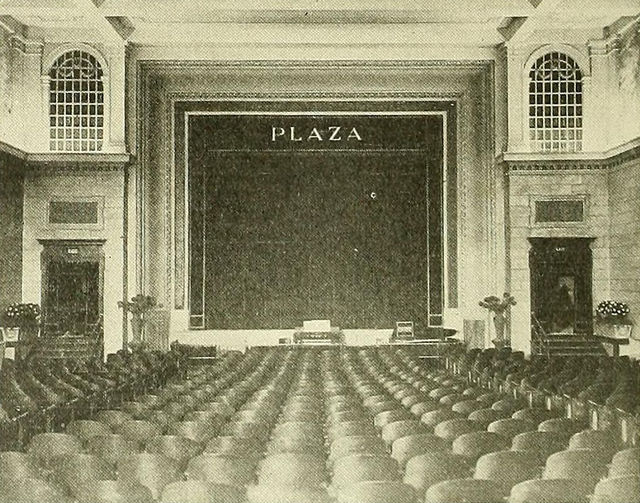 The Plaza Theatre opened December 19, 1914. Around 1930 it had become the Iowa Theatre. On January 24, 1939 it was renamed Orpheum Theatre and was operated by the RKO Circuit. Seating was listed at 1,054. The theatre changed ownership in 1940 and was operated by Mort H. Singer Theatres Corp. The Orpheum Theatre closed September 18, 1955 with Jack Palance in “Kiss of Fire” & Roy Rogers in “The Yellow Rose of Texas”. It was demolished in December 1955.

Any purity squad worth its salt has to have a couple of war veterans:

2/2/51 – A “purity” committee, composed of the police matron, a Catholic priest, member of the Parent-Teachers association and two World war II veterans Thursday asked the manager of the RKO-Orpheum theater to stop showing what they called an “obscene” movie. Mrs. Cecelia Storm, the police matron, said Russell Beach, manager of the theater, was “very cooperative” and the movie was withdrawn.

Mrs. Storm said the picture, â€œInternational Burlesqueâ€, starring Betty Rowland, was chiefly a series of action pictures of five different stripteasers. Billed as “A Ball of Fire,” Miss Rowland appeared to be completely undressed, the committee said. Beach, Mrs. Storm said, told her he intended stopping the presentation of the movie after he saw what type of production it was. The theater manager told Mrs. Storm he had never seen the picture before and was unaware of what type of film it was.

Here is a 1949 ad from the Waterloo Courier:
http://tinyurl.com/2qaawe

Cecilia Storm, nee Sheridan, is my 1st cousin, twice removed. I’d like to locate the family of her husband, Charles Henderson Storm.

The photo of the Orpheum matches a photo of a Waterloo house called the Plaza Theatre that was operating in 1915. It suffered a fire in 1921, according to the November 30 issue of The Insurance Press that year.

The Plaza Theatre was designed by architect Mortimer Cleveland in the Prairie style, though the eclectic interior had some Italian and Egyptian decorative elements.

According to a couple of 1915 trade journals the Plaza opened on December 20th 1914 with seating for 850. It was owned and managed by a Mr J E Bryant.

This was renamed Orpheum on January 24th, 1939 to avoid confusion with the Iowa theatre on Commercial St. Grand opening ad uploaded.