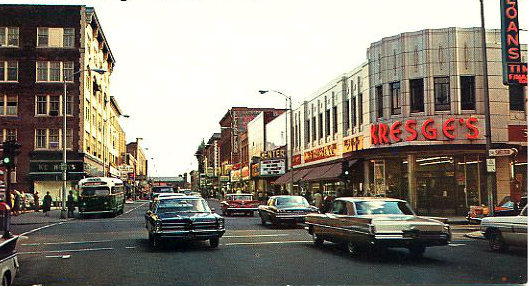 One of three or four movie theatres in downtown Brockton, 20 miles south of Boston, the Rialto Theatre was run by M & P Theatres, a Paramount affiliate. It was opened sometime in the 1910’s or early-1920’s. In around 1949, it was renamed Center Theatre. It was still open in 1956, but had closed by 1957.

The Rialto in Brockton was included in the MGM Theatre Photograph and Report project. The report has an exterior photo dated April 1941. The report states that the Rialto is at 135 ½ Main St., that it has been a MGM customer for over 10 years (as of 1941), that it’s over 15 years old, in Fair condition, and has 688 seats on the main floor and 401 balcony seats. The photo shows that the entrance was at the left end of a clapboard-sided building and that there was a Kresge 5&10 to its left. Movies posted on the small rectangular marquee are “Third Finger, Left Hand” and “Romance of the Rio Grande”. The report states that a competing theatre is the Modern. The 1940 population of Brockton was 62,300. In the 1942-43 Motion Picture Almanac, the Rialto, along with the Brockton Theatre, is listed as part of the M&P Theatres circuit, a Paramount affiliate. This info replaces the thread of comments here which has been deleted for reasons unknown ! (very annoying)

I asked questions a while ago about the City Theater in Brockton which I can no longer find on this website. I was asking for any information relating to the City Theater or the Hathaway Theater in Brockton in the 1920’s where my relatives Evalyn La Telle Jackson and her husband Carl Jackson were both actors. Are there any old cast lists, programmes or photos anywhere? I would be grateful for any comments or help.

The Rialto Theatre, later known as the Center, was rehabilitated in 1949 according to an item in Boxoffice magazine, February 26, 1949:
View link

to D Bird- the City Theatre in Brockton was the leading theater there circa-1900. It was the subject of a one-page article in Marquee Magazine (quarterly journal of the Theatre Historical Society of America) a long time ago (1970s?, 1980s?). There was a Hathaway’s Theatre in Brockton; also one in New Bedford and one in Lowell. (the Hathaway’s in New Bedford has a page here in Cinema Treasures). A few years ago I was made aware of a website which covered Brockton from a historical perspective and it had a list of Brockton theaters, with some info. The list was long and I suspect that it included theaters which had been renamed as if they were new buildings.

When it was reopened as the Center Theatre in Feb. 1949, it was an E.M. Loew circuit house. EML’s designer William Reisman and Associates was in charge of the remodeling and refurbishment.

to R.Salters- Thanks very much for your response re City and Hathaway Theatres in Brockton. I have looked on the Brockton website and sent various emails with no response. Looks like I shall have to employ a researcher to dig up some more info for me. What you have told me has given us a start .If you come across any more info I shall be interested to hear about it!
With thanks.
D.Bird

The Theatre Historical Society archive in Illinois has the MGM Theatre Report for the Center in Brockton. No one filled it out, so there is no info. There is a very nice exterior shot which is undated. The marquee is headed “E.M. Loew’s Center”, and the attraction posted is Jane Russell in “The Outlaw”.