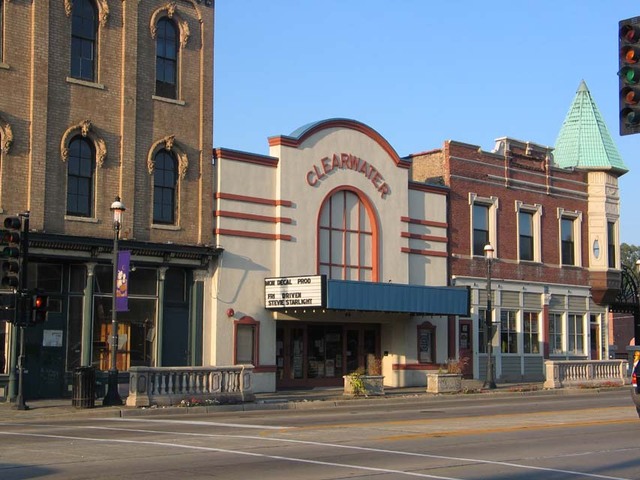 The New Dundee Theater, later known as the Dundee Main Street Theater, was built by Lyman Andrews in 1911 as a venue for vaudeville and movies.

The Dundee Theater screened $1.50 second-run movies before closing on January 31, 1999.

Clearwater Productions took over the Dundee Theater and its adjacent properties in 2002. Clearwater has since returned the theater to its intended function presenting live music and comedy to the western suburbs and Chicago metropolitan area. The theater was renamed Clearwater Theater.

It was ‘temporarily’ closed in September 2011 by the city of West Dundee for operating over a year without a liquor licence. However, the theatre never reopened. In October 2012, the building was ‘For Sale’. In Ocrober 2017 it reopened as the RocHaus, a live music venue.

The unofficial Dundee High School website has historical photos of the Dundee Theater in 1949 at:

It was last operated as a discount venue by Rhyan Management

It’s now called the Clearwater Theater. The present website is clearwatertheater.com and a recent photo is at View link

Here is part of an Arlington Daily Herald article dated 2/10/99:

Just when business was finally picking up on Dundee’s Main Street â€" which nearly became a ghost town two years ago â€" one of the destination draws, the landmark Dundee Theater, has closed. The news surprised many last week, even Cardunal Area Chamber of Commerce President Donna Grimmett said she knew nothing of it until she saw “Closed” replace “$1.50 movies” on a sign out front.

Actually, there was nothing spontaneous about the decision, said George Vallejo, general manager of Ryan Management in Lake Zurich which has owned the Dundee Theater for 19 years. Ryan Management operates several multiplexes in Lake Zurich, Crystal Lake and other northern suburbs. The company has been seriously thinking about unloading its only one-screen theater for more than a year, Vallejo said. “It’s just out of our way,” he said. “We can’t give it the attention it deserves.”

Most take it as a sign of the times: single screens can no longer compete with modern multiplexes which dominate the suburbs. West Dundee Village Manager Joe Cavallaro takes the closing as a setback, but not a defeat. He still believes a one screen theater can make it on Main Street. The theater has been an anchor for the small town business district since 1910, when it featured silent films accompanied by a live orchestra. “With creative marketing, we think a unique service can be delivered,” Cavallaro said.