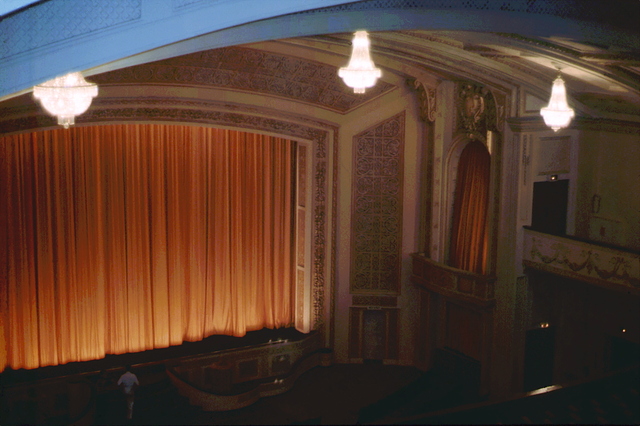 Located in the beach suburb of St. Kilda. Originally built in 1920, designed by architect Cecil F. Keeley. It opened as the Victory Cinema on 18th April 1921 with Thomas Meighan in “Conrad in his Quest of his Youth”. The original seating capacity was for 2,600. By 1928 it had been taken over by Hoyts Theatres and they employed architect Cedric Heise Ballantyne to re-design the building into an Art Deco style, with a slighty reduced seating capacity of 2,500. It re-opened on 19th March 1928 with Ronald Colman in “The Magic Flame”. The building was operated as a Hoyts theatre until closing in 1971.

It was then converted into the home of the National Theatre from 7th September 1974. The dress circle area has been retained as a 783-seat auditorium with 35mm and 16mm capability. The former stalls area is now in use as rehearsal space and offices.

The organisation may be called the AUSTRALIAN National Theatre, but the BUILDING is simply called “The NATIONAL Theatre” -even by the organisation that runs it. I would call it more “classic” than “art-deco” too!
(Being pedantic for history’s sake)..

The original seating capacity of the Victory Theatre was 2,500.

The Australian National Theatre Movement was established in 1935 and toured nationally with opera, ballet & drama until 1954 when the Australian Elizabethan Theatre Trust (AETT) was formed- the National Movement as a private company could not compete with the government-supported AETT and gradually would back its production department, finishing with the Melbourne Opera season in 1971. Hence the “national” name for a company now based in Melbourne only.
The streetscape of the building is classical with rotunda and columns to solve the dilemma of a corner site. Given the building was constructed in 1920/21 and refurbished in 1928 many of its features – including the wonderful first floor chandelier in the Foyer – are clearly art deco. Its a very interesting mix.
The capacity of the Victory Theatre in 1920/21 was actually 3,000 – it was reduced to 2,550 in the 1928 refurbishment as seats were widened to go for the top end of the marketplace (The Palais Theatre and Regent Theatre both opened in 1928 as competition). In 1971 the National Theatre Movement bought the Victory and renamed it as The National Theatre. The stalls were removed and divided into studios for the schools of drama and ballet. The new live theatre (pros arch with fly tower) was added to the front of the old dress circle and the capacity reduced to 800. Subsequently provision for followspots reduced the capacity to the current 783.
Frank van Straten (National Treasure 1994) has written an excellent book on the company, while the building is covered in both “Picture Palaces and Flea Pits” (1983) by Simon Brand, and “Cinemas of Australia via USA” by Ross Thorne (1981)