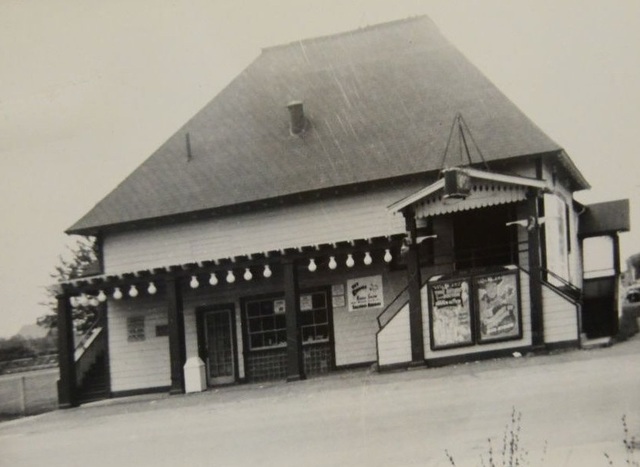 The Bayside Theatre was located on Nantasket Avenue, the main street in Hull, an oceanside community to the southeast of Boston. The theatre occupied a large wood-framed structure and was operated by M & P Theatres, a Paramount affiliate. Further information welcomed.

The Bayside was included in the MGM Theatre Photograph and Report project. There is an exterior photo taken April 1941. The theatre was in a wood-frame structure which resembles a dance hall or roller rink. The main building has clapboard siding and a peaked roof, with a hip-roofed headhouse in front. There was no marquee, only a billboard on the side. The Report states that the theatre is at 767 Nantasket Ave., that it has been showing MGM films for over 10 years; that it’s over 15 years old, in Fair condition, and has 600 seats, all on one floor. The Report indicates that it is a summer operation. The competing theatre is the Apollo, and the 1940 population of Hull was 2,100. In the 1942-43 Motion Picture Almanac, the Bayside is listed under M&P Theatres, a Paramount affiliate; in Hull/ Allerton. ( This info replaces previous data which was somehow deleted from this page).

The Bayside in Hull is mentioned in the Introduction to a new book “Boston’s Downtown Movie Palaces” by Arthur Singer and Ron Goodman (Arcadia Publishing- Images of America, 2011). Author Singer grew up in Boston and spent summers in Hull. He was a frequent patron at the Bayside. He confirms that it was indeed only open in the summer. He says there was a refreshment stand on the sidewalk and that the theater was an “Upstairs House”: one walked up a flight of steps to a second-floor lobby where tickets were purchased. He said that the Bayside had only 150 seats which is less than what was listed on the 1941 MGM Theatre Report. There was a small projection booth presided over by “Meyer the Projectionist”. Twice a week the ushers changed the movie title lettering and the posters. They wore white shirts and blue pants. Later, at age 14, he became an usher there himself.

This theater was not a real “upstairs house”. From the street entrance there were a few steps, maybe about 6, which led up to the lobby. The front of the auditorium and the stage area were at ground level. This info is from Someone Who Was There. He nearly purchased the theater, but the deal fell through, and it went to a church instead.

The Bayside was a part of The EM Loew Theatre chain out of Boston in the late 60 S and early 70 S I was the manager from 1969 thru 1970 summers only. It was a special place and had a great time. Was later sold to a church. We had a projectionist Dave Emery and an usher Al ?don t remember. He had a greenBaracuda and was from Hull. We played a new first run movie a week to less them capacity crowds. miss the old Bayside and Sar Ho Village across the street. RichardMyerson .com

Greetings Rich! It’s Dave….I was the projectionist at the Bayside when you and I (and your brother) were there in the summer of 1970. I can’t remember Al’s last name either but I’ll never forget the ‘Cuda he drove. I think Lori Weinstein and Laura Greenglass were our theater cheerleaders back then, and I think the Simplex projectors and the 1927 Western Electric sound system were not exactly state of the art…including the tuba behind the screen that was the sound system speaker. “Easy Rider” was our first film of the season. Remember the rainy day matinee when you had us show “Night of the Living Dead??? I think we scarred half of the child population of Nantasket for life!! Ah yes..the "interesting” chicken wings at Sar Ho’s, Paragon park and days on the beach. It was truly a great time being there, lots of great memories!

Ron Salters and others,

Thank you for your comments on the Bayside Theatre. My grandfather Daniel J. Murphy owned the theatre back in the days of the silent films and beyond. He also owned Loring Hall in Hingham. In 1941 he & our grandmother, traveled by train as the guests of MGM studios with a trainful of theatre owners to Holywood. I have a picture of him with the original MGM lion and also one with Ray Milland the actor. I appreciated hearing your memories, thank you for sharing them!