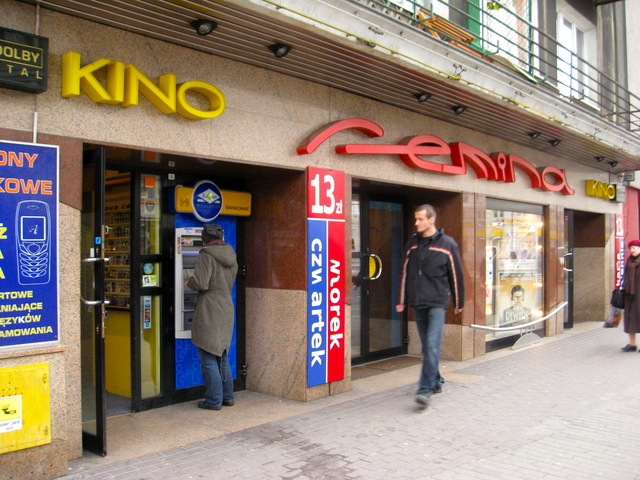 The Femina Cinema is located on the corner of Solidarnosci Avenue and Jana Pawla II Avenue in the old former Jewish quarter which became the Warsaw ghetto during the Nazi occupation from November 1940. During this period of time, the cinema became a focal point for musicians and actors (some famous) to perform on stage and lift the spirits of the oppressed population. It is one of only a few of the original buildings remaining in the district.

It was closed in 1994 for a modernisation which took two years to complete and it re-opened in May 1996 as a four screen cinema (the first to open in Poland). The largest screen seats 270 and smallest has a seating capacity of 50. At that time they were the only Polish cinemas to be equipped with Digital DTS Dolby stereo. The Femina Cinema was closed in September 2014. It has become a supermarket.

Photographs of the Femina, from Nobember 2009.

This cinema closed in September 2014 with screenings of Miasto 44 on all 4 screens.

Just checked, it is now a Biedronka supermarket.