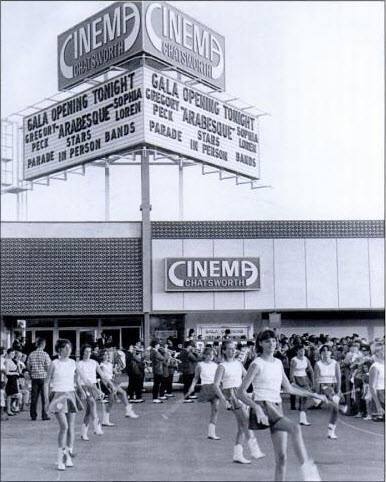 This long-defunct venue was once the key occupant of a shopping center on the southeast corner of Devonshire Street and Mason Avenue.

It was opened as the Cinema Chatsworth on June 29, 1966 with Gregory Peck in “Arabesque”. It was operated by a variety of franchises throughout its lifetime–including the Century Theatres, Loews and General Cinema chains. On April 5, 1980 it was renamed Cinema 76 and began screening Spanish language movies.

By the early-1990’s, it was shut down and converted into retail space.

I do not remember this theater from when I lived in Chatsworth in the early 1970s, however at least until recently the marquee remained over the building. This had prompted me to inquire on my posting for the nearby former Holiday Theater as to the name of this theater. I am happy someone that knew of this theater at Mason and Devonshire posted. Thank you.

The building still has that theater-marquee-like structure on its roof, which displays “TUESDAY MORNING” for the store it now houses. Around the building’s perimeter, there are still several doorways & ramps along the rear & side walls of this deep structure which resemble the backsides of theater venues with numerous screens.

Accurate theater information as of this posting is still sketchy.

No pictures too bad.

The gala grand opening of the Cinema Chatsworth on Devonshire at Mason. The theater opened with the premier of Arabesque starring Gregory Peck and Sophia Loren (they were to make a personal appearance). The Chatsworth HS Marching Band and Majorettes were the entertainment in a street parade.

I moved to Northridge in ‘79, and this theater had been closed at that point. I remember the shopping center being kind of 'derelict’ looking through the 80’s and 90’s, but was redone to match the real estate prices, LOL. I will have to look the next time I go to visit my family to see if they still have the marquee as ‘Lavarus’ posted back in ‘08 that it was still there.

I went to the gala grand opening which was attended by many movie stars – got several autographs in my autograph book purchased at Thrifty’s next door as they drove up in their Limos – Bill Bixby, Lee Meriweather, Jon Provost just to name a few. Went to many movies at this theater growing up in Chatsworth. Ah the memories … … .

This opened on June 29th, 1966. Grand opening ad in the photo section.