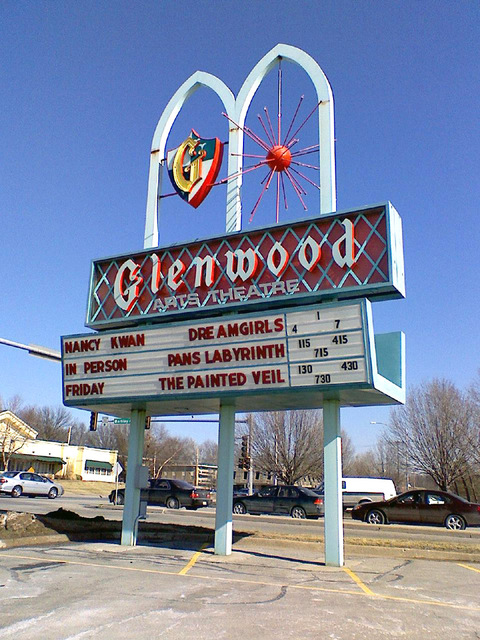 After five years of planning and the expenditure of more than $500,000, the Glenwood Theatre in Overland Park, KS opened to the public on November 23, 1966.

Hailed as ‘Kansas City’s Luxury Theater’, it maintained that stature for over 33 years.

Outside, a large fountain stood amongst beautifully landscaped grounds. Inside, the Grand Promenade exhibited statues, a fireplace, and most noticeably, a 15 feet wide by 15 feet tall imported Italian crystal chandelier.

As a movie would begin, 40 foot tall curtains would slowly retract to reveal a 70 feet wide by 35 feet tall curved screen. The Glenwood Theatre was capable of showing 16mm, 35mm, and 70mm film formats.

As the movie exhibition industry became more competitive, a second smaller screen was added to the side of the main auditorium.

The Glenwood Theatre quickly became the most popular theatres in the Kansas City area, setting the world record for ‘Star Wars’ after making $1 million the first year of its release.

In 1983, two more smaller screens were added, but the original auditorium continued to be the popular draw.

With the introduction of a nearby megaplex in the 1990’s, ticket sales at the Glenwood Theatre declined.

Unable to compete, the theater closed in May 2000.

Sadly, amid much protest, the Glenwood Theatre was razed in November 2000 and was replaced by a strip mall, signaling the end of a magical cinematic era.

I worked at Glenwood Theater from February 1977 to October 1977. I started in the concession stand and moved to ticket sales sometime after the Star Wars opening. I remember Star Wars there fondly. We had a Kansas City premier for the movie the night before it opened nationwide. Several employees dressed as characters from the movie, an usher as Chewbacca and the head cashier as Princess Leia. I dressed in a formal and handed out roses to all of the ladies attending. Smitty was the projectionist at the time and we all swore he lived in the projection booth – he had a bed and bathroom there and we rarely saw him leave. Every night after the last show had started, we would total the ticket receipts and then call in our total sales to each distributor. The lobby design was not meant for sell-out shows. As the crowds would build, the lobby would fill and completely surround the concession stand and ticket booth, both round, and once you had served everyone closest to you, there wasn’t much to do until they started seating for that show. The manager was named Pat, don’t recall his last name, and the assistant manager had been an owner or manager for one of the drive-ins, Shawnee Drive-In perhaps. Great memories! Loved that theater and was very sad to see it go!

“The Rocketeer” was presented at the Glenwood in 70mm 6-Track THX Dolby Stereo SR beginning on Friday June 21, 1991 (the film’s nationwide release date).

Patton had an exclusive run at the Empire Theater and it was probably the last 70 mm film there with the curved very large Cinerama screen.

Here are fresh links to the March 20, 1967, Boxoffice article about the Glenwood Theatre:

Went to Planet of the Apes as an 8 year old in 1968. It was the first time I was in a true theater and I remember being impressed. Previously my family only took us kids to drive-ins.

Also in photo section. but unreadable there.

Here is the link to a new “Hello, Dolly!” 50th anniversary retro article featuring a historian Q&A and roadshow chronology (which includes mention of its North American record-length run at the Glenwood).

Facebook album with 51 photos of the Glenwood Theatre’s final days in 2000, and 10 November 2000 demolition photos in the 2nd album. Credit Brad Moore.

Leading up to the premiere in each city, was the same Billy Jack circus: karate demonstrations, live bands, and the girls holding the cards that spelled B-I-L-L-Y-J-A-C-K. Below the circus is staged out front of the Glenwood Theaters outside Kansas City, Kansas. The picture on the bottom shows some of the incredible turnout. The end result of the advertising and promotional blitz were crowds, massive, never ending crowds. Remember, Billy Jack had already been the second-highest grossing film of 1971 behind Fiddler on the Roof, bringing in an earth-shattering $32,500,000. This was 1972-1973, about 12 months later. And Billy Jack is on its way to earning an additional $60,000,000, which will make it the highest grossing film in history by the end of 1973 with a grand total of $92,500,000. Beating out monster hits like The Godfather ($86M), The Exorcist($89M), and The Sting ($78M).