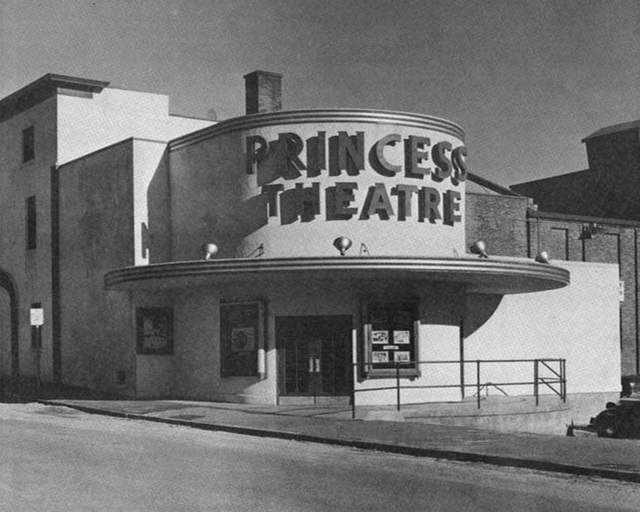 The Princess Theatre was located on a sidestreet in Wakefield, a suburb of Boston. It was an older theatre which was modernized in 1938. Further information welcomed.

The 1927 Film Daily Yearbook lists the Princess Theatre in Wakefield as having 800 seats and open 6 days per week. The MGM Theatre Photograph and Report form for the Princess has an exterior photo dated March 1941. The theatre was apparently “modernized” in 1938. It’s an older theatre with a new streamlined front. The entrance is on the right corner of the building; there is a semi-circular rain canopy over a set of double doors, with “Princess Theatre” in enormous letters on the wall above. There appears to be an elevated stage house at the rear. The Report states that the Princess has been showing MGM product for 3 years; that it was “Built” in 1938; that it’s in DeLuxe condition, and has 489 orchestra seats and 210 balcony seats; total: 699 seats. It’s at 26 Mechanic St.; the competing theatre is the Wakefield Th., and the 1940 population of Wakefield was 16,200.

Here is an undated photo of the Princess:
http://tinyurl.com/c8zne2

The comedian Fred Allen, in his autobiography, says that the last vaudeville engagement he had in eastern-MA prior to heading to New York to find stage work there was at the Princess in Wakefield. This would have been in Sept. 1914.