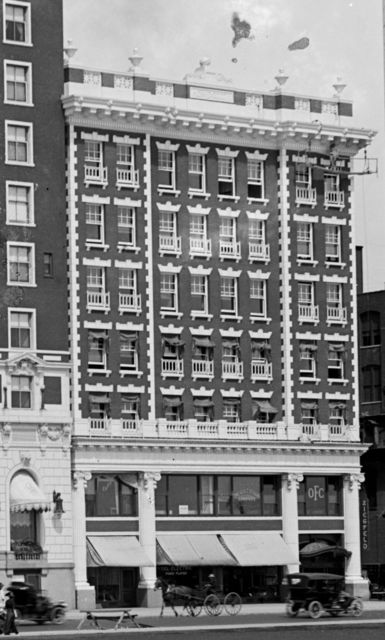 Built in 1908 by as part of the Chicago Musical College building, the Ziegfeld became a movie theater for the Alfred Hamburger circuit January 10, 1914.

Apparently the Ziegfeld was known as the V.L.S.E. in 1916 while showing Vitagraph features. VLSE stood for Vitagraph-Lubin-Selig-Essanay after those studios entered into a cooperative distribution agreement. Vitagraph later bought out the others.

The theater closed in 1921 as the building was expanded from eight stories to the present fourteen by architect Alfred Alschuler.

For many years it was recognizable for its large “Torco” sign dominating the skyline, next to the Blackstone Hotel. This Ziegfeld was not named for Florenz Ziegfeld Jr. of the famous Follies, but rather Florenz Sr., founder of the Chicago Musical College. The theater was said to have a capacity of 800 and was designed after the casino at Monte Carlo. Today, the building serves as one of the primary buildings of Columbia College.

Good catch Warren. According to Wikipedia, Billie Burke was married to Florenz Ziegfeld Jr. from 1914-1932.

So it’s probably no coincidence that the ad states: Only Theatre in the City to See Billie Burke in “Let’s Get A Divorce”.

She didn’t necessarily need the nepotism, and apparently always performed under her own name even after marriage.
Since her birth name was Mary William Ethelbert Appleton Burke, choosing Billie after her own father Billy, seemed the right choice. According to Wiki he was a singing clown.

My father was a student at the Chicago Musical College in the late 1940’s. He was subsequently hired to score some of the 1950 Charlton Heston version of “Julius Caesar” that was filmed in Chicago.