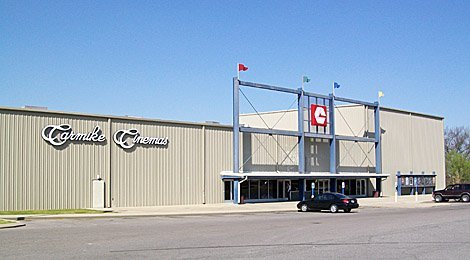 Martin Theatres opened the Martin Twin in 1972, in the Green Village Shopping Center. The theatre has since been expanded to nine screens and became part of the Carmike circuit.

It opened as the Martin TWIN, before one of the auditoriums was divded.

Actually, they might have added the largest auditorium (seen to the right in the above photos)AFTER the building housing the twins was first constructed in 72. The first film that I remember seeing in the large auditorium was “Star Wars” in 1977, and “Close Encounters” (1977). “Earthquake” (1974) was definitely in one of the twins in the main building, as was “The Towering Inferno” (1974).

So Ripshin,you guys had “SHAKE AND BAKE” under one roof. if they had senssurround on EARTHQUAKE like we did at the IMPERIAL in Augusta that must have been a wild event.

If Carmike has this place it will be run in the ground before you know it.what do they pay their managers? 3.50 an hour.

Yep, we had Sensurround. I did check with some still-locals, and it was indeed built as a twin, with the larger auditorium constructed on the side, around 76/77.

That sadly looks like a cheap warehouse. The original must have been totally demolished. Granted, it was no beauty, either.