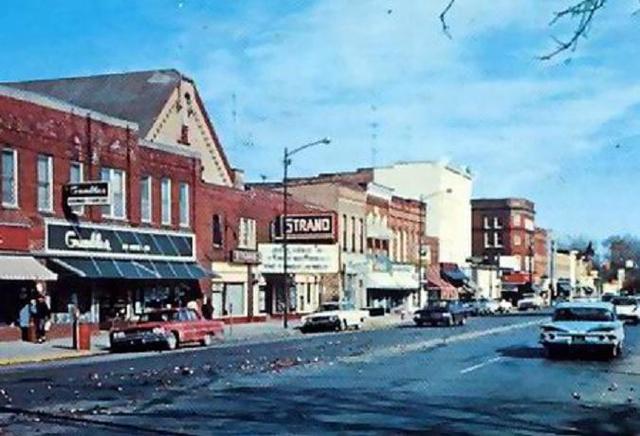 I see it…it’s the roof that is triangle shaped!

Patsy and Lost Memory, several years ago I remember seeing a theater at this website whose auditorium ceiling was triangular in shape, but I’ve long lost track of what theater it was, though I know it was in Australia. Probably Sydney, but don’t hold me to it. And it seems it had been designed by John Eberson, but I just went through the CT John Eberson listings and it wasn’t there. In any event, my guess is the Strand Theatre’s auditorium ceiling is (or was) quite similar. And you’re right, it does look like it had more than 400 seats. Maybe more info can be found out about it by writing to Denine Wells, who handles general questions for the Tecumseh Downtown Development Authority. Her e-mail address is .us

TheaterBuff1: Thanks for the information and email address. Gosh, now we’re getting posts addressed to both of us, Lost!

Great! Look forward to hearing what you hear back!

Lost: Unfortunately, I think there are so many CT theatres listed as closed that should actually be listed as demolished!

At the very least, we the posters get to post what the latest status of a theater is, which is what I go by. And now we know what the story is with Tecumseh’s Strand, though I was hoping to hear that it was still standing, and better still, that it was still a theater. What’s sad in this case is that nobody remembers it so that good lessons learned from it can be carried over to theaters anew. I myself have never been to a theater that I have no memories of, unlike how it is with other types of businesses. For how do you forget a theater, given the much more intimate nature of it then say a supermarket, or drugstore, or even a motel for that matter?

But here’s a theater that, so far, at least, nobody remembers. And was it really that bad? Or just…well, what else could it be? But even if it was a terrible theater I’d still like to know, well why was it a terrible theater as an important thing to know in going forward.

In any event, thanks Lost Memory for letting us know what its current status is!

I just found this site and am excited to see the Strand listed and discussed. I have fond memories of the Strand in Tecumseh. I grew up there and remember seeing Ben-Hur first run when I was about five with my older brother. The last movie I saw there was The Flim Flam Man in 1967. Sadly, it was demolished shortly after. I’ll have to check but I think that was the year it was torn down but might have been 1968. I would walk by the site during my school lunch hour during the demolition period and one day I found a few tickets from a ticket roll amongst the rubble in the ticket booth area. I still have those today and are a cherished piece of local/movie history for me. Thinking back, it’s amazing i was able to get that close.

I hope to find more info about the Opera House days and will report back. I do recall hearing that during the vaudeville days, many acts came through little Tecumseh and performed there, including the Marx Brothers. When I was a kid I’d heard that there was still a Marx Bros. poster on a wall backstage from that era but don’t recall that ever confirming that. I remember looking for it during the demolition but, of course, I had limited access.

In 1940 my grandfather’s Johnson Construction Company remodeled the Strand Theatre in Tecumseh, Michigan. Al Johnson’s July 1948 Kodachrome, from eight years later, shows a building that appears to have had many iterations. I’ve uploaded a copy to this site. On the marquee in that image is Frank Capra’s 1948 film “State of the Union,” starring Spencer Tracy and Katharine Hepburn.

A modest modern theater entrance, including signage and a marquee, has been built onto the front of a brick structure that itself appears to have been added to an older gabled building behind it. What we can see of the front of that building includes some very ornate brick work. It would be interesting to know more about that original structure.

The cream and red color scheme of the Strand Theatre entrance was characteristic of Johnson theaters, and the three “art deco” style doors with round glass on top are similar to those in other 1940s Johnson theaters.