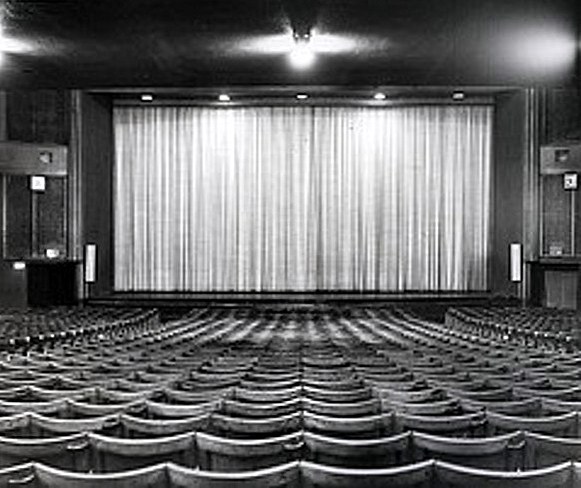 The Regal Cinema in Chesterfield, Derbyshire, was opened by Associated British Cinemas(ABC) on 12th October 1936 with Fred Astaire & Ginger Rogers in “Follow the Fleet”. It was designed for the Lou Morris chain by architect J. Owen Bond to be named the Ritz Cinema and was taken over before completion by Associated British Cinemas who engaged their ‘in-house’ architect William R. Glen. It had 2,048 seats in stalls and balcony, a 46 foot proscenium opening and a 16 foot deep stage with four dressing rooms. There was an organ installed, a 3Manual/7Ranks instrument by Compton which was opened by organist Wilfred Southworth.

In 1961 it was re-named ABC and in the 1960’s many pop shows were staged including in April 1977 The Walker Brothers, Jimi Hendrix, Cat Stevens & Englebert Humperdinck were all in the same programme! Other artistes appearing at the ABC during this period include:Traffic and The Kinks. In June 1971 it closed for conversion into a smaller cinema using the balcony (with a wall at the balcony front) seating 484, together with a Painted Wagon pub in the rear stalls area. The front stalls and stage were not affected by this alteration, nor were they ever used again.

It became a Cannon, then was sold off to Peter Walker and was re-named Regal Cinema. In 1988 there were plans proposed to add a second screen in the front stalls and stage and a third screen in the former café, but these plans were never carried out. The Regal Cinema closed on 18th April 1993. It became a nightclub named Zanzibar, and last operated as Department until it was closed in 2014. The former stalls is in retail use by Boyes department store. The former circle area is unused.

Now in use as a Zanzibar nightclub.

The Regal closed on 18th April 1993. The final film shown was the 1940hrs showing of “The Distinguished Gentleman” starring Eddie Murphy.

A photo as the Escapade nightclub in March 2009

does anyone remember the live shows at the Regal in the 60`s, I remember seeing lots of the Liverpool/Manchester groups there

I remember going to see the live shows at the regal in the 60`s.. saw lots of the popular groups of the time there including the Everly Brothers and also a show sponsored by one of the pirate radio stations of the time “Radio London” happy times

I have a programme of a “Grand Concert” held at the Regal Cinema some time in the 1930s. The artists appearing were Mr Flotsam and Mr Jetsam, Webster Booth, The Chesterfield Male Voice Choir and the Belton Singers. I was interested to read more about the cinema here.

A CTA friend reports that the bulk of the building is now used by Boyes Dept store, a chain of stores in northern England. Their site gives no information but if they reply I shall add confirmation later,.

The ground floor (stalls) area of the Regal is indeed unrecognisable as a Boyes Store. The Upper level has been in nightclub use for some years but is currently vacant – the last club seems to have been named “Department”. Photo from 2019.

Ian, do you have any photos of the foyer? I remember there being a very elegant staircase with spiral lights, do you remember?