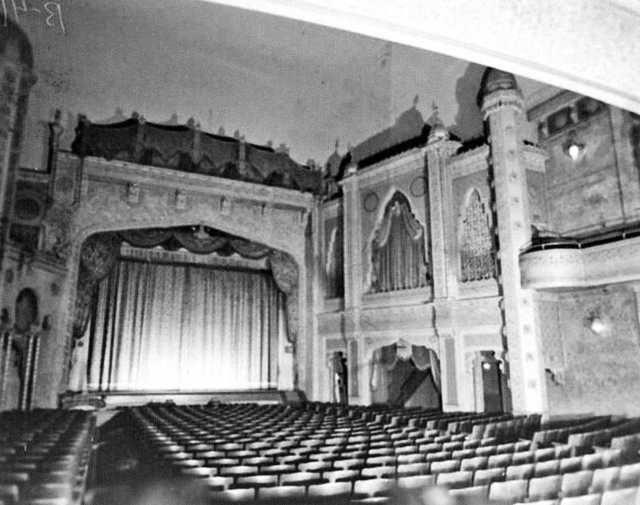 Built on the site of the Bijou Theater (which has its own page on Cinema Treasures). This was the showplace of Appleton since it opened on November 16, 1929 as the Fox Theatre. It was designed in a Moorish/Atmospheric style by architect Larry P. Larson. In the 1930’s it was renamed Rio Theatre and closed in 1959. It was demolished in April 1963.

Kind of hard to tell exactly from one of the pictures posted above, but methinks that the site of the Rio is now occuped either by the Appleton Public Library or parking ramp across the street from it.

From the first Rio photo link above, here is the same view now..

Looks like the parking garage (hidden from view) is the site. And the building on the right hand corner is still there….

Well, if you look at my picture, and the Google map provided with the link, the 100 block of Oneida doesn’t exist any longer…. It did at one time.

If the theater was indeed at 119, that would put it in between E. College and Washington. Greyhound is listed at 100 E. Washington.

I was just saying the Rio was between College and Washington St, in the 100 block, and you did not agree. You are saying it’s in the 200 block. That’s all…

But you are right, Oneida and N. Oneida at one point are 2 different streets. They actually merge together.

And it changes from one to the other completely as it goes North a few blocks to Wisconsin Ave. You’re right, very odd it would do that.

Bing Maps has a bird’s-eye view showing that the two blocks either side of Oneida Street between College Avenue and Washington Street have been consumed by one of those enclosed downtown shopping malls that became so popular for a while. It’s called City Center Plaza, which is a bit ironic considering that they apparently gutted a big chunk of the center of the city to build it. Part of the multi-level garage on the north side of the project must occupy the site of the Rio.

Use the address 2 E. College Ave., Appleton, WI at Bing Maps and select bird’s eye view to see what became of the 100 block of N. Oneida Street.

The diamond-patterned tapestry brick and the arches on the facade of the Rio reveal the architectural style to be Venetian. Most likely the interior was also Venetian. The name Rio in the dialect of Venice is the singular of rii, the local term for the side canals leading off the Grand Canal.

I’ve been unable to discover the name of the architect of this splendid theater, but reports in the trade papers of the time indicate that it was built for Fox Theatres. Movie Age of January 12, 1929, said that plans had been approved for a 2000-seat theater to be built at Appleton by Fox-Midwesco, and it would be completed by September that year. This was probably the Rio.

Information about the surviving Wurlitzer organ from the Rio can be found on this web page.

The theatre opened with 2,000 seats (700 of which were in the balcony) as the FOX on November 16, 1929, and was designed in Moorish style by the architects of United Studios of Chicago, the same firm which designed the KENOSHA, the Racine VENETIAN and the SHEBOYGAN. Two of the architects who worked for United were Ralph Beaudry and Fred Jacobs. United’s manager/director was L. P. Larsen.

My father, Bud Owen was an assistant manager under Stan Gross. When I was a kid I used to sit at the Wurlitzer organ when dad took me to the theater. It was very impressive to a 5 year old.

I grew up in Appleton Kimberly in the 70s, and I am active on a “You Know You Grew Up in Appleton If, …” Facebook group.

The Rio was perhaps the best example of a late 1920s era movie palace in the Fox Cities.

The Rio Theater was purchased by the H.C. Prange Co., a now-defunct Wisconsin-based department chain. About 1960 Prange’s built a huge new 6-story plus basement store near the Rio. After the sale, the Rio was renamed the Prange’s Anex for a few years. Prange’s then demolished the Rio for their customer and employee parking ramp. Some office and retail space was available in an attached building along Washington Street.

Interestingly from old photos I’ve seen it appears the Rio was one of very few old movie palaces to not have “modernized” its marquee in the late 40s or 1950s. It appears the Rio kept the old wooden letters style marquee right up to its closing.