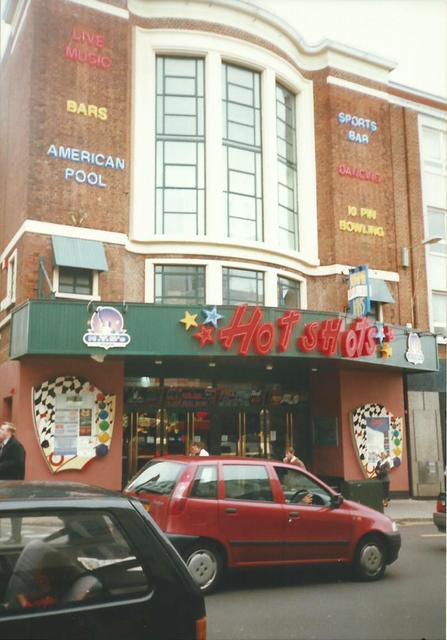 The story of the Imperial Theatre/Essoldo Brighton is a sad one of wanton vandalism by the lessee (Rank Organisation) and inaction or complicity by the freeholder (Brighton Council) when in 1997 the fine Art Deco style interior was wrecked by removal of one of the two balconies and the gutting of the ground floor to make a very short-lived (18 months) bowling alley followed by another short lived venture as Jumpin' Jacks Nightclub which closed in February 1999. Demolition came in January 2001 for a speculative retail / residential accommodation scheme was unpreventable as the building was by then, to all intents and purposes, beyond restoration.

It was designed by the eminent theatre/cinema architect Samuel Beverley (of architectural firm Verity and Beverley). The interior decorations were by John Alexander. The proscenium was 48ft wide and the stage 40ft deep. There were six dressing rooms. It was planned as a live theatre for Jack Buchanan with a foundation stone laid by Ralph Lynn in July 1939. It opened on 9th April 1940 with Jack Buchanan & Elsie Randolph in the musical stage presentation “Top Hat and Tails”. Equipped with a Western Electric(WE) sound system, it presented its first film season in 1943, the projection suite was at balcony (top) level and was most likely part of the original brief. From August 1948 it became mainly a cinema but still with regular, if occasional, stage use. After Jack Buchanan, the theatre was owned by Gaywood Cinemas and from 1949 the Newcastle based Essoldo Cinemas circuit who renamed the building in 1950. It closed on 10th May 1964 with Richard Todd in “Never Let Go” & Jennifer West in “Teenage Lovers”. It was converted into an Essoldo Bingo Club from 15th May 1964, followed by a Ladbroke’s Bingo Club and latterly owned by the Rank Organisation and operating as a Top Rank Bingo Club .

It was a late-Art Deco style building with an elegant foyer entered from North Street. The exterior in red brick had a narrow corner frontage containing a glass and metal tall window at second and third floor levels with five square windows in a 1-3-1 spacing below, the middle three being in line with the tall windows above. The façade was neon lit at night, which extended down the side of the building for a few feet, to give impact from the busy crossroads at the Quadrant. The Imperial Theatre was next to the minor entrance hall of the great Regent Cinema, just across the side road. The side elevation in Windsor Street was massed blocks of red brick with the stage at the far end of the building. Numerous emergency exits were located on this elevation. Dressing rooms were stacked up at the sides of the stage, which had a fly tower.

The auditorium seated 1,877 divided between stalls, circle and balcony. It was decorated with a marine motif, appropriate for this seaside town. Dolphins and cockleshells (many concealing lights) could be found in the fibrous plaster all over the theatre. There were five boxes on either side of the stage, the first one of double height and then two at circle level with two at balcony level immediately above, all having bulbous fronts set between Ionic columns topped by shells. There were six further boxes at the rear of the circle in pairs between the four sets of entrance doors. The proscenium was a quadruple stepped rectangle, richly decorated between steps 1 and 2 with an open strapwork design with panels of shells and seahorses at regular intervals.

On conversion to bingo a few minor (reversible) alterations were made including the insertion through the left hand tall box of a staircase linking stalls and circle, the building of a balcony level on the stage, and a false ceiling cutting off the upper stage levels. More seriously, the foyer was opened up at ground floor level. However, the lounges looking through the tall curved windows at upper levels remained untouched.

This was a solidly built theatre that remained in excellent condition until Rank’s inexcusable destruction of the interior in 1997.

I’m curious – looking at the arrangement of the boxes in Ian’s excellent Flickr shots above, I can see some evidence that the Scottish architect John Fairweather might have been involved, as it is reminiscent of the boxes on some of his Green’s Playhouses – especially Ayr. However, the other link, posted by Ken, attributes the interior to a J Alexandra. Can anyone shed any light on this one? I’m also looking for similar information regarding Fairweather’s involvement with the Chingford Odeon, as indicated by that cinema’s entry on this site. All information greatly appreciated!

I think that is a misprint in the website, the interior was reputed to be by John Fairweather.

There is a little more information here:-
View link

Oddly enough, it was the Wikipedia entry for Green’s Playhouse which started this, as the person who wrote it quotes Cinema Treasures as the source for Fairweather being involved in both this cinema and the Odeon in Chingford. So it’s all becoming a bit circular – there’s no mention of Fairweather’s involvement in either in Allen Eyle’s Odeon Cinemas Vol I & II, or in the recent copy of Picture House devoted to the Essoldo chain.

Having now seen the interior of the Essoldo Brighton, I can quite happily see that it looks like a Fairweather, although some more solid evidence would be nice! But I still can’t see any stylistic evidence that he was involved in the Odeon Chingford – the very plain auditorium is pictured on p67 of Odeon Cinemas Vol I.

I fully agree with your final paragraph and I worked for them. The Plaza/Gaumont Southsea is a typical example. The auditorium and queuing lobby had amazing hand painted panels, which when Rank Bingo took over all but one was over painted. The surviving panel in the queuing lobby lasted for many years, see my details on Plaza Southsea. However, this too was overpainted after this building was listed and before it became a Mosque. Sadly it is only when the building has Grade II* or Grade I is it safe.