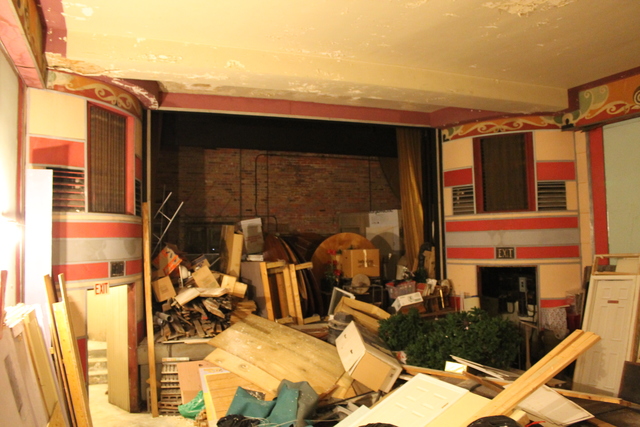 Built in 1920 as a post office, it was remodeled into the Carolina Theatre in 1935. It was closed in 1962. The Carolina Theatre is a vintage theatre that has been remodeled for retail uses. The marquee still hangs outside advertising the yoga studio that utilizes the small adapted auditorium.

According to Bowers' “Encyclopedia of Automatic Musical Instruments” page 551, there was a “Capital” theatre in Asheboro equipped with a Reproduco organ made by the Operators Piano Co. I could not find a page for the Capital, so I am putting this here for the time being.

The Architectural History of Randolph County North Carolina, published in 1985, says that the Carolina Theatre building was built in the 1920s as a post office. In 1935, the post office moved and the building was remodeled into a theater.

The interior featured some Art Deco detailing which (as of 1985) could still be seen in an area used for storage. The Carolina Theatre closed in 1962, and the building sat vacant until 1981 when it was again remodeled for commercial use.

There’s a small photo of the theater at the bottom of this page of the book.

Thanks for the heads up, Stephen. Looks like something extra got into the URL. Here is a repaired link. Click the + sign in the tool bar at lower right of that web page to enlarge the image.

Yes, the Carolina Theatre was in the building that now houses the Asheboro offices of the Christian youth organization Young Life. The awning is probably attached to the old theater marquee.

Circa 1950 photo added via Thomas Landen.