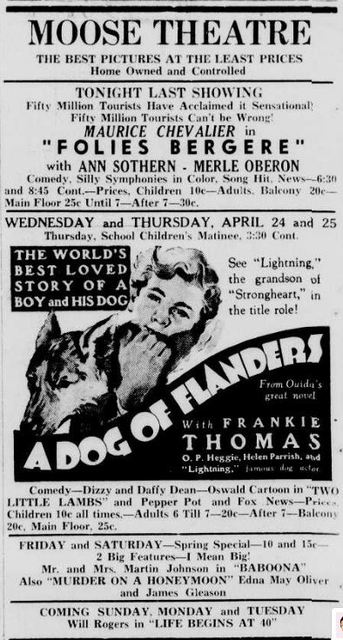 Located next to Norwalk Armory on W. Monroe Street & Case Avenue. The Gilger Theatre was built in 1903 as a playhouse. It was converted to a movie theatre after the First World War, and was later purchased by the Schine chain. By 1941 it had been renamed Moose Theatre. The theatre was destroyed in a fire on February 6, 1959.

That’s a great name for a boxing referee.

Boxoffice Magazine ran an item about the fire in the February 16, 1959, issue, and refers to the Gilger Theatre Building, rather than Gilger Theatre. It said the theater had been in use as a warehouse for several years, but didn’t say what name it had been using before closing.

A brief notice of the death of William Gilger was published in Boxoffice on February 14, 1948. This item said that he had built the Gilger Theatre in 1903 and had sold it following WWI.

I’ve found the Moose Theatre mentioned in issues of Boxoffice from 1939, 1943, and 1944, but there’s nothing in these items to indicate whether or not it was the same theater as the Gilger.

A Rootsweb page mentions Mary Pickford’s “Coquette” playing at the moose Theatre in Norwalk in 1929. There was also a postcard captioned “Moose Theatre and Armory” for sale on eBay, but the image is gone. The eBay image for the Gilger Theatre postcard Lost Memory linked to above is also gone, so there’d be nothing to compare it with anyway.

Google Books provides a snippet view of the 1939 Film Daily Yearbook, which shows two theaters listed for Norwalk, Ohio; the Forum, with 600 seats, and the Moose, with 800 seats. A 1935 Boxoffice item I cited in a comment on the Norwalk Theatre page said that the Forum had been built in 1934.

The Norwalk Reflector, the local newspaper, has available on its web site various items headed “Blast From the Past” which give capsule news reports from the paper’s archives. The earliest date of any of these that mention the Moose Theatre comes from March 27, 1926. The most recent item cited that mentions the Gilger Theatre is from February 19, 1916; earlier than the 1919 boxing matches Lost Memory cited in the first comment here.

The Rochester, New York, architectural firm Leon H. Lempert & Son placed an ad in the 1905 edition of Julius Cahn’s Theatrical Guide. It listed a number of theaters the firm had designed, and the Gilger Opera House in Norwalk, Ohio, was among them.

I was a child when the Gilger Theatre burned.The above Google map is incorrect when showing the position of the theatre. It was located one block west of its shown position on the map. The area where the theatre was located is now the Norwalk Public Library parking lot. On the day after the fire, my family watched as the orginal marquee was cut down.