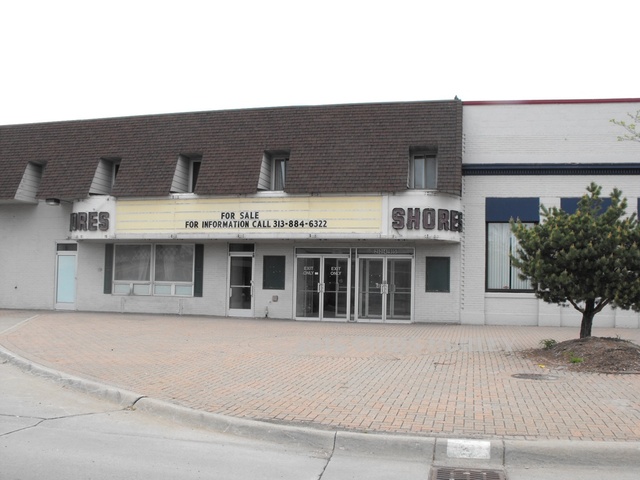 Perhaps the last great East Side suburban movie house’s, the Shores Theatre was opened around 1938 and was designed by architectural firm Bennett & Straight in a Streamline Moderne style with silhouetted walls.

In 2008 it was listed as closed for renovation, but this never happened.

As far as I know the building is still there. Photo is from 2011.

Should also note, no, it’s not open.

The Shores Theatre first appeared in the FDY in 1939, but was probably opened by 1938. This item from the July 17, 1937 issue of The Film Daily is probably about the Shores:

“Detroit — New theater building to seat 1,000, plus four stores — already leased — is to be erected by newly formed Joy Theater Corp. at a cost of $100,000, at Nine Mile and Mack Roads in St. Clair Shores, northeastern suburb.

“Project is based upon a year’s study of the location by George W. Sampson, former owner of the Dawn Theater, and former premium distributor, who is president and general manager of the company. C. E. Daniel, contractor, is vice-president; and J. E. Foster of the Commonwealth-Commercial Bank, is secretary-treasurer.

“House will be modernistic with Chinese red macotta front with blue background. Bennett and Straight, theatrical architects, are completing plans.”The original Streamline Modern style of the Shores was characteristic of Bennett & Straight’s work in the late 1930s. At some point, probably in the 1970s, the original facade was disfigured by the removal of the small entrance tower and the addition of a fake mansard to the second floor. A ca. 1944 photo is among those that can be seen at Water Winter Wonderland.

Website with some photos and a rendering of what never happened.