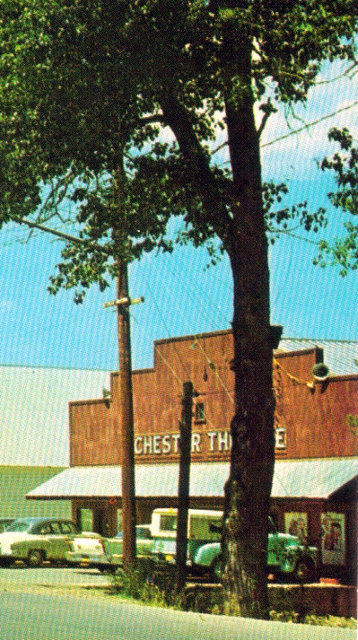 It was renovated in 2018 and reopened as the Mt. Lassen Theatre, in use as a church and showing movies.

This is from Boxoffice in January 1948:

CHESTER, CALIF.-On the eve of closing for remodeling, the Chester Theater was severely damaged by fire. Ed Blair, owner, said the loss of about $20,000 was only partially covered by insurance. Mr. and Mrs. Blair, whose home was in the rear of the theater, lost all their personal belongings.

Once known as the Cheppar T. Macker. Spelling negotiable…

200 Main Street was the address of this Chester Theatre. The new theatre was built and launched in January of 1949. The Chester had a long run. Under new owners in 1981, it became the Chester Theatre and Video Store. It only showed films on weekends during much of its run as a video operation. It was renamed Chester Video in 1986 and appears to have dropped the showing of films. The auditorium was used as a church from that point forward. The Chester Video operation appears to have gone out of business in 2000 continuing as Chester Christian Fellowship Church until 2013.

The building got a major renovation to return to cinematic glory and return as a church, as well. The theatre re-opened as the Mt. Lassen Theatre (and Church) in 2018. Its website is:

The first Chester Theatre was destroyed by fire on December 20, 1947. The Chester the second of three major theater fires in the ares in just a year along with the Greenville and Quincy theatres. That theatre, also on Main Street, dated back to the silent era in the 1920s.