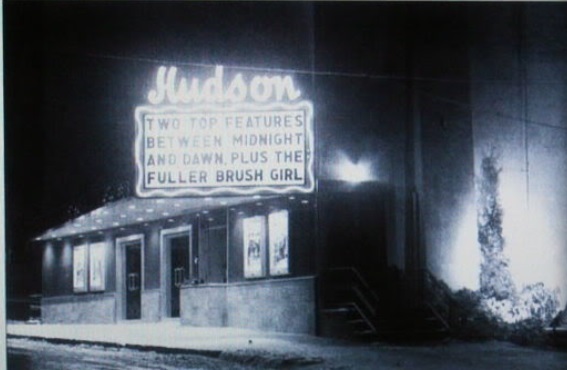 The Hudson was the only movie theatre in the town of Hudson, a suburb to the west of Boston and north of Framingham. Further information welcomed.

The MGM Theatre Photograph and Report form for the Hudson Theatre has an exterior photo dated April 1941. The Hudson was a prominent free-standing building about 3 stories high. There is a marquee along the front which is interesting because instead of having side panels facing up and down the sidewalk in both directions, it has a panel only on the right side. In the center of the marquee is the year “1920” or “1930” . Under the marquee are 4 sets of double French-style doors. On either side of the doors is a large and elaborate poster case. The Report states that the Hudson has been showing MGM films for over 10 years; that it’s over 10 years old, is in Fair condition, and has 570 seats on the main floor and 292 in the balcony, total: 862 seats. Nearest competing theatre is in Marlboro MA. The 1940 population of Hudson was 8,000.

Here is an undated photo of the Hudson:
http://tinyurl.com/2pwhu9

The circa-1950 photo of the Hudson Th. on Pope St. is quite different from the 1941 photo in the MGM Report. The entire street-level front of the theatre has been up-dated and “modernized” for ken mc’s newer photo.