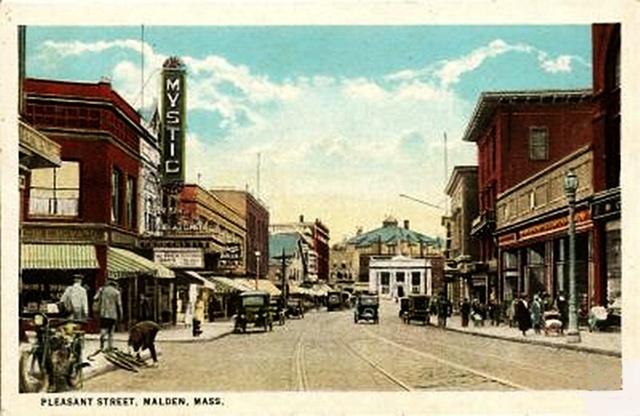 The New Mystic Theatre was one of six theatres in Malden controlled by the Middlesex Amusement Company. It apparently suffered a fire some time in the early-1930’s and was rebuilt. It reopened as the Mystic Theatre on February 25, 1938 with Dick Powell in “Hollywood Hotel”. It was still open in 1952, but had closed by 1955.

The MGM Theatre Photograph and Report form for the Mystic has an exterior photo dated April 1941. The entrance was the second bay from the left end of an commercial building at least 2 stories high. Above the rectangular marquee was a fancy arch and what appears to be a verticle blade sign. Movies posted were “Footsteps in the Dark” and “Flight from Destiny”, plus “Bank Night Every Thur Eve”. Hanging from the marquee bottom is a banner reading “Tonite Bank Night”. The Report states that the Mystic is on Pleasant St. in Malden, that it has been presenting MGM films for over 10 years; is over 15 years old, and in Fair condition. The seating figures have been messed with and crossed out. Someone wrote in pen “Rebuilt after fire about 8 years ago”.

Opened as the New Mystic Theatre, “Completely Rebuilt and Modernized,” on February 25th, 1938, with a double bill topped by “Hollywood Hotel.” Newspaper ad posted in the Photos Section.