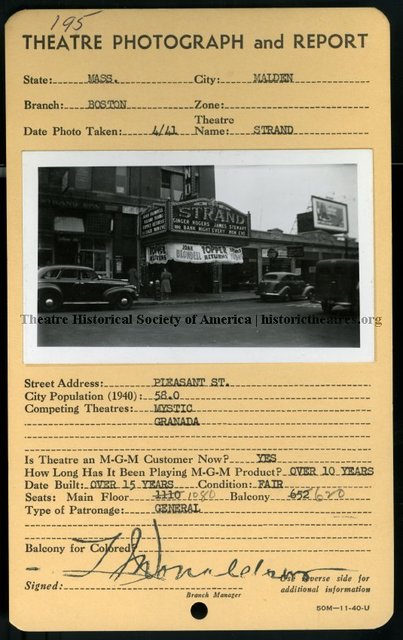 The Strand was one of downtown Malden’s larger movie theaters. It was run by Middlesex Amusement Company at one time. Further information welcomed.

The MGM Theatre Photograph and Report form for the Strand in Malden has an exterior photo dated April 1941. The entrance was in the right end of a commercial building at least 3 stories high. There was a big, boxy 1930-era marquee with a vetical sign above. Ginger Rogers and James Stewart are posted on the marquee front, along with “100 Bank Night Every Mon Eve”. Hanging from the bottom edge of the marquee is a big cloth banner advertising Joan Blondell in “Topper Returns”. The Report says that the Strand has been showing MGM films for over 10 years; that it’s over 15 years old; in Fair condition, and has 1080 seats on the main floor and 620 in the balcony, total: 1,700 seats. In the 1927 Film Daily Yearbook, the Strand in Malden is listed as being open 6 days per week and having 1,500 seats.