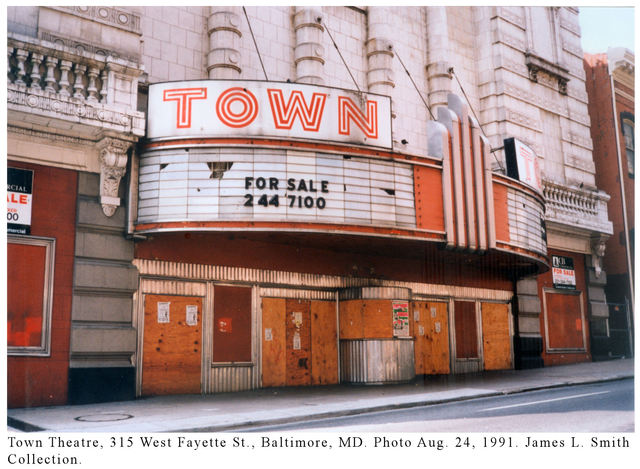 Construction began on July 15, 1911 and designed in the Beaux-Arts style, the Empire Theatre was just around the corner from the Hippodrome Theatre, and has one of the more interesting histories of downtown Baltimore theatres. The 2,000-seat theatre was opened on December 25, 1911 with Barney Gerald’s “Follies of the Day”. It was renamed Palace Theatre on August 14, 1920 presenting burlesque with James E. Cooper’s “Folly Town”. After a period presenting movies, it was closed in October 1937.

It was gutted and served as a garage for ten years. In 1946 it was rebuilt with an unusual Art Moderne style motif (designed by architects John Zink and Lucius White). The new incarnation seated 1,550, and opened again as a movie house named Town Theatre on January 22, 1947. It was converted to Cinerama in 1953.

It was twinned on November 1, 1985. The Town Theatre ultimately closed in 1990, and for a time its future looked bleak, as the city’s new downtown revitalization plan called for the demolition of many older buildings located in the west downtown district.

However, the venue was saved when the Everyman Theatre troupe, a successful regional theatre, bought the building for $1, with an eye to making it their new home. In 2010 fundraising began to do a complete remodeling. The interior was in bad shape, and the building was gutted to construct a black box theatre within the shell, also providing appropriate rehearsal space. The façade was fully restored. It reopened the Fall of 2012.

“She’s Gotta Have It” and “Daughter of Dracula.”

To the person who wrote in 2004 about Cinerama doing badly in Baltimore. Baltimore got on the bandwagon too late. 4 years too late. By the time it got to Baltimore it had already been ion D>C> & Philly many years before. We had a similiar experience here in the Boston area because it took a few years for Providence(50 miles) and Hartford(100 miles) to get Cinerama(3 strip). It did well in both venues but not as long as Boston. We then got Cinerama(70mm) in Worcester(45miles) and in Lawrence(35 miles). Did not do well. Boston did very well because it was in the big city, larger theatre and opened here 1st. Boston was the 5th Cinerama theatre(3 strip). Lasted from 1953 until the early seventies.

The 1952 photo of the Town Theatre in Boxoffice can now be seen at this link.

The web site of the Everyman Theatre is now saying that their new venue will be opened in the fall of this year. The picture of the restored facade on this page shows the name Everyman on the vertical sign, so apparently none of the house’s historic names will be brought back.

Why a photo of a decrepit 1991 Town Theatre? If a dated photo is to be shown, why not one when it was the Empire or Palace?

My great grandfather worked on the renovation of the Town theater, Lucius R. White.

Great facade and marquee. Interior must have been nice also. Pictures?

This opened as Town on January 22nd, 1947. Grand opening ad in the photo section.

The Empire (owned and operated by Mr. George W. Rife including his whole company with his name being the theater name) began construction during the middle of July 1911.

Shortly after the ground broke during the beginning of construction on July 15, 1911, one of the construction workers lost his balance and fell 50 feet from one of the floors to the sidewalk. He was identified as a colored man, 34-year-old Edward Carter of 1819 Druid Hill Avenue in Baltimore. He was rushed to Mercy Hospital in a Western district patrol after receiving a broken jaw, lacerated chin, and a few other internal injuries.

The Empire was originally scheduled to open its doors on November 1, 1911, but was rescheduled and pushed to November 27, 1911, but it didn’t happen. Its opening date was then rescheduled again to its exact grand opening day on Christmas Day 1911 with Barney Gerald’s “Follies Of The Day”.

Information about the Empire goes as follows: The decorations as of 1911 were colored with mint green tint, embellished with gold, and the draperies were deep in a soft rose color and red for carpeting. The main auditorium stretches a wide proscenium arch, and an unobstructed depth of 55ft and has a capacity of 2,000 seats as of 1911 in leather seats, marking it the largest in Baltimore at the WWI era, although it originally supposed to have a capacity of 2,400 a month right after the theater began construction. There were separated areas which included the stage, dressing room, and stairs from the auditorium.

The Empire became the Palace on August 14, 1920 with James E. Cooper’s “Folly Town” as a burlesquer. The theater switched formats from back-and-forth with films and burlesquers.

After closing as a burlesquer in October 1937, the theater sat quiet, even throughout all of WWII. Although according to the Baltimore Sun, there are failed plans to erect the theater.

Exactly a year right after WWII had died in 1946, architects John Zink and Lucius White held its design to the Town and was built. With 450 seats being taken out from the original Empire theatre, the 1,550-capacity Town Theatre would later open its doors to the public on January 22, 1947 with Baltimore’s premiere of the Frank Capra classic “It’s A Wonderful Life” with no extras or short subjects.

Edward Carter, the guy who fell 50 feet during construction of the Empire Theatre in July 1911, was later arrested and charged by the Baltimore Police Department while recovering from his injuries. He later pleaded guilty to the court that September 15th on an unknown degree of common assault, who sentenced him to 5 months in jail.