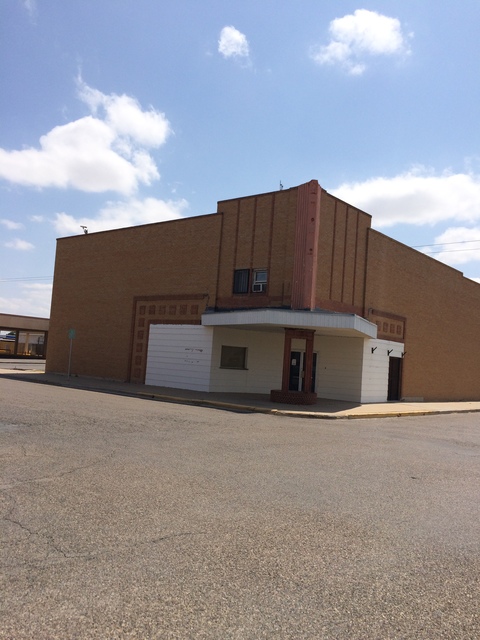 The Texan Theater was opened September 16, 1947. It had been closed for a few years when it was renovated and reopened on March 1, 1972 as a Jerry Lewis Cinema, screening Walt Disney’s animated “Pinocchio”. It was closed in March 1973. It reopened as the Smile Theatre in July 1973 and closed in September 1973. It appears that the theater is now used for special events.

The March 13, 1972, issue of Boxoffice said that a free-standing Jerry Lewis Cinema had opened March 1 in Monahans, Texas, at the southwest corner of 2nd and Allen. That’s where the Texan is.

The local paper does say that the Jerry Lewis Cinema relaunched this venue on March 1, 1972 with Disney’s classic “Pinocchio.” It then closed a year later in March of 1973. It became the Smile Theatre for a short period of time from July to September of 1973 before being sold at auction in 1975. It was sold to a local bank which turned into a video production facility.

Probably the largest Jerry Lewis Cinema at over 1100 seats. Most, if not all were between 300 and 350 seats.

There were several JL’s in the Atlanta area but they were all new builds as were the shopping centers they were located in. On CT I have seen entries of these theaters being built in existing shopping centers where they converted existing retail space. (There were several examples of this type theater in Atlanta but they were not JL’s.) This is the only example I have seen of a JL being opened in an existing theater. dallasmovie….. seems very knowledgeable about theaters. I have enjoyed reading his many posts on the history of theaters in the Dallas area in general and GCC in particular, so I am not questioning the information. It just seems that in a location such as this it would be impossible to use the JL business model of completely automated equipment, minimal staffing, and G and PG only movies.

I was equally surprised to see a JLC in an existing theater because the point was – as Stan notes – to get the Jerry Lewis Cinema architectural plans for a new-build theater in exchange for your franchise fee . But have attached a photo of that theatre and an ad to prove that someone did plunk down some money as a franchisee for the JLC name. I’d imagine that was an interesting call and, true, I’d guess the Network Cinema Corp. would take money from anyone offering it up. Sadly – like the vast majority of other JLCs – this was a major failure lasting not long after the Network Cinema Corp. and JL went bust. (And thanks much for the positive comment!)

markp and dallas, I have a JL projection booth equipment question for you. When I visited my first JL, the Buford Highway Twin, the booth was equipped in the standard way most new builds of that era were, twin 6000 foot reel projectors. The operator told me that originally the theater was equipped with a dual projector Eprad system called Saber, or possibly Sword, I can’t really remember. He said that the projectors only had to be threaded once. When the changeover or end of show shut down occurred instead of the film running on through, the projector would stop and run in reverse until the entire reel was back to the 8 on the leader.

This sounds incredible to me and in 40 years of working in theaters, 30 in the booth, I have never seen anything like it. I have heard mention of it over the years as well as a system where the film arrived already mounted on 6000 foot reels, something like WB tried in the late 90’s, only the JL reels were encased in a cartridge like container that fit on top of the projector. The idea was that this would make the theater even more automated while ensuring that the owner could not play any movies not approved by the company since regular reels would not work.

Can either of you shed any light on these seemingly unlikely methods of running film? If they did exist in any form they must not have worked well. Over the years I have never ceased to be amazed at the lengths ownership would go to in order to eliminate that pesky projectionist. I mean I even worked one theater equipped with a Christie Endless Loop Platter.

The Sabre was the simpler of the two systems, the projector and lamphouse were mounted on top of the Sabre, eliminating the traditional base. The entire film was mounted on a single large reel that was underneath the lamphouse, feed reel was on the left, takeup on the right. The reel was large enough to hold most double features. Film went through a series of rollers and twists from the underslung reel up to above the projector/soundhead which were of standard design and threaded normally. A few more rollers to the takeup reel. With this system, the projector had to to be threaded for each show and rewound after. Rewind could take place on the Sabre, no need to move the reels. It worked reasonably well. Both takeup and feed reels were fitted with reversable torque motors so that tension on the film remained low and constant throughout the reel. A single projector booth was possible.

We were an XXX grindhouse, open for 16 hours a day, 7 days a week. If we had a brand new print, it would last about a week before we would start to have film breaks at the splices. This was prior to the change to Polyester based film, everything was still acetate at the time. Film is like a rope in that it doesn’t push well, trying to have the intermittent sprocket push the film up through the partially open gate did not work well at all. We eventually gave up on the reverse operation and used it like a Sabre.

So, that system really did exist! If I had not known the two guys who told me about it I would have assumed that it was the stuff of urban legend. Thank you for that very detailed and entertaining description. Amazing that someone wise enough to design something like the Sword would be so unwise as to think it would work dependably. You mentioned new prints. I would imagine that with used prints, and every JL I have first hand knowledge of was a second run house, every stripped or broken hole would have snagged on that partially open gate. It must have been quite a sight to see one projector running normally and one running in reverse.

As for the Sabre, I have actually seen one of those up close. In 1999 some friends and I drove to Dayton Ohio to see How The West Was Won in Cinerama at the New Neon theater there. That night we went to a local drive in, and the manager was nice enough to give us a tour. The projector was mounted on the floor as usual and the feed and take up reels were to the right. I do remember the Eprad brand name on the equipment. I guess any brand projector would work on this system since I recall this one being a Simplex. It was a one projector booth and they had the double feature on separate reels.

That Eprad was an odd company. In my theater managing days I worked for a company that was always willing to let people demonstrate their new equipment, not at some slow neighborhood location, but at their flagship first run theater. I recall losing a show once when the Christie demo projector broke down after less than a week. Later they let Eprad install some type of two channel synthetic stereo system which was supposed to give you surround sound without the expense of buying a Dolby brand system. I recall talk of some sort of sound splitting principle that would give you stereo effect even on a mono print but that may have been on some other gadget. It was 1980, a long time ago for my memory.

I guess I have wandered off of the original subject of this odd example of a Jerry Lewis operation, but hopefully someone with JL booth experiences will see it and add their comments on this subject to other pages. Dallas, I recently added a comment / question to the page you started on the JL in Winder Ga. Any additional info you have on that would be welcome.